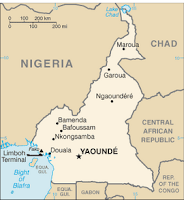 
Although Cameroon hasn't reported a bird flu outbreak in nearly a decade - given its close proximity to hard hit Nigeria- it isn't all that surprising that they would find themselves once again dealing with an outbreak of H5N1.

This report by Lefigaro.fr with AFP.

Cameroon: a bird flu outbreak detected
Update on 05/26/2016 at 10:47
A home H5N1 avian influenza has been identified in a poultry farm in Yaounde, killing nearly 15,000 poultry in three days, reported today the Cameroonian state radio. The virus was detected Mvog Betsi poultry complex on the outskirts of Yaounde, following the finding of a "high mortality in poultry" in this firm, announced the radio, adding that "nearly 15,000" 33,000 poultry on account that the site died.

The deaths were recorded in three days, between 20 and 23 May, according to an analysis report of the National Veterinary Laboratory (LANAVET) consulted by AFP. The dead birds were incinerated and the rest of the herd was slaughtered, while access to the infected area is now prohibited, according to the radio citing the government.


You can also read an English language report at Panic as bird flu outbreak kills 15,000 birds in Cameroon where the country's Minister of Livestock, Fisheries and Animal Industries is quoted as confirming H5N1.


As we've discussed previously, surveillance and reporting of all diseases (human and livestock) is weak across much of Africa, and the assumption is that outbreaks like these may occur but may only rarely be reported.


Last March, in Libya's Under Reported Burden Of H5N1 (FAO Workshop), we learned of an FAO report which cited `at least 4 deaths' due to H5N1 in Libya, and more than 100 suspected or confirmed poultry outbreaks.

Yet `officially',  Libya has never reported a human H5N1 infection to WHO.


Last summer, in FAO: Concerns Rising Over Spread Of Avian Flu In Africa and again last October in WHO Scales Up Influenza Surveillance In Africa we looked at growing concerns over the recent spread of highly pathogenic avian flu in Africa and the very limited surveillance and reporting from the region.

This outbreak - on the outskirts of Yaounde - which is both the nation's capital and has a population of 2.5 million, almost certainly improves the odds of it being noticed, tested, and publically announced.

Hopefully this discovery will lead to more intense surveillance in Cameroon's rural districts as well.