WHO Avian Flu Risk Assessment - May 2016


The World Health Organization has published their monthly Influenza at the Human-Animal Interface risk assessment (dated May 9th, but just posted) which provides details on three different types of human avian flu (H5N6, H7N9, and H9N2) infections reported during the last reporting month.


Influenza at the human-animal interface

Risk assessment outcome: The overall public health risk from currently known influenza viruses at the human-animal interface has not changed. Since animals are reservoirs for influenza, further human infections with viruses of animal origin can be expected but the likelihood of sustained human-to-human transmission remains low.

Reporting: All human infections caused by a new influenza subtype are reportable under the International Health Regulations (IHR, 2005). 2 This includes any animal and non-circulating seasonal viruses. Information from these notifications will continue to inform risk assessments for influenza at the human-animal interface.


Although H7N9 remains the most active of the avian flu viruses this winter, as the epi curve chart at the top of this post shows, overall reports of H7N9 infection have declined this year.

Whether this is due to a change in the virus, the environment, or a change in reporting and surveillance is hard to tell.


Todays report lists 17 new cases (previously reported in this blog) and details one additional cluster, albeit from last February and March:

The cluster included an 85-year-old female from Zhejiang Province. She had onset of symptoms on 1 March and passed away on 8 March. She had been admitted to the same hospital and shared the ward with a confirmed case between 22 and 23 February. She was not exposed to live poultry or live poultry market, according to her relatives.

Human to human transmission between the 29-year-old male and the 85-year-old female is likely considering the virological information obtained thus far. For more details on the cluster, see the Disease Outbreak News.


On the ascendant the past few months has been the H5N6 virus, which up until last December, had only infected 5 people in the previous year and a half.  Since then, the number of cases has almost tripled (n=14). 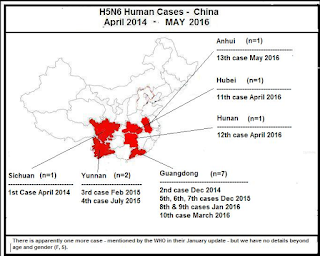 Today's WHO assessment notes not only the increase in human infections, but the ongoing evolution of the virus as well.

A total of 14 laboratory-confirmed cases of human infection with avian influenza A(H5N6) virus, including six deaths, have been detected in China since 2014. In the past four months, twice as many cases have been reported since the first case was detected in 2014.


To date, no changes in transmissibility in humans have been detected as a result of these reassortant 1viruses. Surveillance is continuing in both human and animal populations to monitor for further virus evolution. All recent avian influenza A(H5N6) viruses that have been tested remain susceptible to the neuraminidase inhibitor class of antiviral drugs.

One human infection with avian influenza A(H9) virus was reported from Egypt. The case is a 18-month-old male from Cairo Governorate who developed influenza-like illness on 10 April 2016. On20 April 2016, a sample from this patient tested positive for an influenza A(H9) virus. The patient is reportedly in good condition and the epidemiological investigation revealed the case had exposure to live poultry at a market in the two weeks prior to onset of illness. While infection with influenza A(H9N2) is likely in this case, laboratory confirmation of the neuraminidase type is anticipated.

A total of 28 laboratory-confirmed, non-fatal cases of human infection with avian influenza A(H9N2) viruses have been detected globally in the past. In most human cases, the associated disease symptoms have been mild and there has been no evidence of human-to-human transmission.

Influenza A(H9N2) viruses are enzootic in poultry populations in parts of Africa, Asia and the Middle East. The majority of viruses that have been sequenced belong to the A/quail/Hong Kong/G1/97 (G1), A/chicken/Beijing/1/94 (Y280/G9), or Eurasian clades.


While H9N2 is generally viewed as a lesser human health threat, we've followed its continual evolution as well (see Genomic Characteristics Of 2 A(H9N2) Virus Isolates From Humans In Anhui Province - 2015), and like H5N6, case reports have increased over the past year.

The report closes with the WHO's overall recommendations, which stresses the need for global surveillance, continued vigilance and the importance of rapid and accurate reporting.

Posted by Michael Coston at 6:42 AM