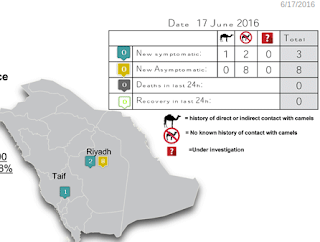 After a quiet May and first half of June, the number of MERS cases in Saudi Arabia has jumped markedly  with 18 cases reported in the past 72 hours - most of which are linked to an outbreak at King Khalid Hospital in Riyadh.


After avoiding large nosocomial outbreaks for months, the MOH now reports 8 Healthcare workers and 7 patients infected in this outbreak, which will no doubt call into question this hospital's infection control procedures.

This will also be the first major MERS outbreak that the new Saudi Minister of Health - Dr. Tawfiq bin Fawzan bin Muhammad Al-Rabiah - who was appointed in early May, has had to deal with.


A Primary, symptomatic case is also reported in Taif.

While this seems like an unusually large number of asymptomatic cases, Saudi Arabia only began to aggressively test for, and report, these types of cases last fall following criticism from the WHO (see WHO Guidance On The Management Of Asymptomatic MERS Cases).


So our understanding of what is `normal' may be skewed somewhat by a lack of data from earlier outbreaks.