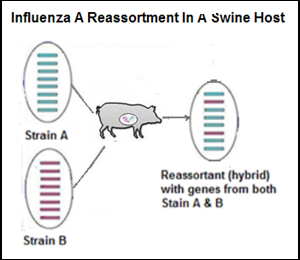 
While our immediate concerns over avian flu viruses tend to relax a bit during the summer months, the same cannot be said for swine variant viruses, which most often show up in humans during the summer and fall.

Influenza circulates in swine year round, but county and state fairs - which are generally held during warm weather months -  provide excellent swap meets where  pigs and humans can exchange flu viruses.


Up until about six years ago the CDC only received 1 or 2 swine variant infection reports each year. In 2010, that number jumped to 8, and in 2011 to 12. In 2012 we saw more than 300 cases – mostly mild - and nearly all associated with exposure to pigs at state and local agricultural fairs.


Surveillance is problematic, since few with mild to moderate flu symptoms are ever tested, even in the United States.  So human infection is likely far more common than we know.

Swine are considered excellent `mixing vessels' for influenza, and human flu viruses - including H1N1pdm - are constantly being re-introduced into swine herds around the world.


Last December, in PNAS: The Pandemic Potential Of Eurasian Avian-like H1N1 (EAH1N1) Swine Influenza, we looked at a study by Chinese and Japanese researchers who had isolated and characterized a number of avian-like H1N1 virus variants circulating in Chinese pigs that they believe have considerable pandemic potential.


Today we've another study - again out of China - where researchers experimentally infected pigs with one of these  Eurasian-Avian H1N1 swine influenza viruses and the 2009 H1N1pdm virus.


In doing so, they generated yielded 55 novel reassortant viruses spread across 17 genotypes, demonstrating not only how readily EAH1N1 SIV can reassort with human H1N1pdm in a swine host, but also finding:


The full study is available at the link below.  When you return, I'll have a bit more.

Given the present extensive co-circulation in pigs of Eurasian avian-like (EA) swine H1N1 and 2009 pandemic (pdm/09) H1N1 viruses, reassortment between them is highly plausible but largely uncharacterized.

Here, experimentally co-infected pigs with a representative EA virus and a pdm/09 virus yielded 55 novel reassortant viruses that could be categorized into 17 genotypes from Gt1 to Gt17 based on segment segregation. Majority of novel reassortants were isolated from the lower respiratory tract.

Most of reassortant viruses were more pathogenic and contagious than the parental EA viruses in mice and guinea pigs. The most transmissible reassortant genotypes demonstrated in guinea pigs (Gt2, Gt3, Gt7, Gt10 and Gt13) were also the most lethal in mice.

Notably, nearly all these highly virulent reassortants (all except Gt13) were characterized with possession of EA H1 and full complement of pdm/09 ribonucleoprotein genes.

Compositionally, we demonstrated that EA H1-222G contributed to virulence by its ability to bind avian-type sialic acid receptors, and that pdm/09 RNP conferred the most robust polymerase activity to reassortants.

The present study revealed high reassortment compatibility between EA and pdm/09 viruses in pigs, which could give rise to progeny reassortant viruses with enhanced virulence and transmissibility in mice and guinea pig models.

While avian influenzas get the bulk of our attention  – mostly due to their high fatality rate – swine flu viruses are considered more likely to jump to humans, simply because they fall in the same H1, H2, and H3 subtypes as `humanized’ flu strains of the past 130 years.

The authors of the above study go on to say in their closing remarks:

In summary, our data highlight the potential public health danger of novel viruses arising from reassortment in pigs between circulating EA swine H1N1 and pdm/09 H1N1 viruses. Such reassortants for which there is little apparent cross protection from current vaccines could be much more pathogenic and transmissible than parental viruses.

For more on swine as potential `flu factories’, you may wish to revisit: