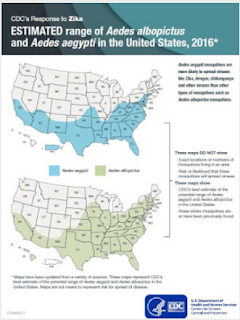 
With yesterday's surprise announcement of a locally transmitted case of Zika in Utah - in a region where the assumed mosquito vector (Aedes) isn't normally found - has raised questions once again about what other vectors might be able to transmit the virus.

Previously we've seen reports suggesting that the Culex mosquito might be a competent vector (see Fiocruz: Zika Virus Experimentally Introduced Into Culex Mosquitoes), but their role (if any) in transmitting the virus remains unproven.


While it may not be the last word in the matter, the EID Journal has published a letter that casts doubt on the ability of the Culex mosquito to harbor and transmit the virus.


You'll want to read the full report, but the gist of their findings is contained in the excerpt below:

All samples from Cx. pipiens mosquitoes and all replicates were negative for Zika virus by plaque assay (Table). In contrast, Ae. triseriatus mosquitoes were susceptible to infection when exposed to mice with the highest viremia concentrations (Table).

However, none of these infected mosquitoes disseminated virus and none were capable of transmitting the virus. Data from Ae. albopictus and Ae. aegypti mosquitoes that had been exposed to the same mice demonstrated that the viremia concentrations used could productively infect mosquitoes.


The full report, including methods and materials, can be read at the link below.