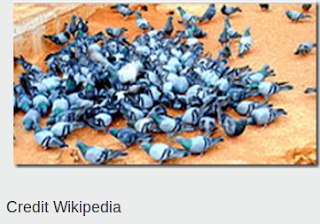 
Although the evidence has at times been contradictory, for the most part pigeons are believed fairly immune to  HPAI H5N1 (see 2006's Magazine article The Invincible, Flu-Immune Pigeon).

Given their ubiquity and peridomestic haunts, that's been a very good thing.


It should be noted, however, that many of the laboratory experiments exonerating pigeons were conducted in the middle of the last decade, with older clades of the H5N1 virus.

Clades that have been largely supplanted by the continual evolution of the virus around the globe.


The record with H5N1 and pigeons has been mixed over the years, and we've seen a small number of human and animal infections that have been linked to infected pigeons.


While pigeons have played only a small role in H5N1's spread, in recent years they have been linked to avian H7N9 (see Eurosurveillance: Genetic Tuning Of Avian H7N9 During Interspecies Transmission & human cases here, here & here).

As with H5N1, H7N9 infection in pigeons is a `silent’ infection, and its ecology is poorly understood.


A 2014 paper by Carol Cardona, Pomeroy Chair in Avian Health, at the University of Minnesota, called Pigeons and influenza viruses, runs concisely through the history of HPAI in pigeons, and ends by saying:

In conclusion, pigeons are probably quite resistant to infection with AIV normally.  However, it may be possible for AIV to become adapted to pigeons.  The naturally occurring infections that have been documented have been limited in numbers not caused outbreaks.  Pigeons have been infected with several H5 sublineage viruses indicating that they are a potential host.


Over the past couple of years we've started seeing some subtle signs that some strains of HPAI H5N1 might just be adapting better to pigeons, including:

The authors called this  `. . .the first description and characterization of HPAIV in naturally infected pigeons in Egypt. Our findings reveal that pigeons can indeed be susceptible to H5N1 HPAIVs and could be a source of infection to other birds and humans.'


The authors concluded by writing:


The results of this study revealed that H5N1 HPAIVs are continually evolving and changing their pathogenicity to be able to replicate and shed from infected  pigeons,  consequently  increasing  the risk  of transmission  to  other avian species  and humans  and emphasizing the importance of full genome sequencing of pigeon H5N1 isolates.

Just last November, in Study: Genomic Analysis Of HPAI H5N1 Isolated From Pigeons – China, we looked at an analysis of a reassorted HPAI H5N1 virus isolated from pigeons in Hubei Province, China in 2012.


In conclusion, RP25 is a novel reassortant avian influenza virus, and poses a potential threat to human. These results highlight the importance of persistent surveillance for H5 subtype AIV in birds.

Today we've the abstract from a new study that characterizes a pair of HPAI H5N1 viruses isolated from Egyptian pigeons, and finds some unique mutations not reported in other Egyptian isolates.

However, recent studies reported natural pigeon infections with highly pathogenic avian influenza H5N1 viruses. In Egypt, which is one of the H5N1 endemic areas for birds, pigeons are raised in towers built on farms in backyards and on house roofs, providing a potential risk for virus transmission from pigeons to humans.

In this study, we performed genetic analysis of two H5N1 virus strains that were isolated from naturally infected pigeons in Egypt. Genetic and phylogenetic analyses showed that these viruses originated from Egyptian H5N1 viruses that were circulating in chickens or ducks.

Our findings suggested that pigeons are naturally infected with H5N1 virus and can be a potential reservoir for transmission to humans, and showed the importance of genetic analysis of H5N1 internal genes.

The only constant with influenza is that it is always changing,
something that was clearly demonstrated during the last decade when both  equine H3N8 and avian H3N2 jumped to canines.

While pigeons don't appear to have played much of a role in the ecology of H5N1 to date, there are no guarantees going into the future.


Hence the need for ongoing surveillance and genetic analysis.