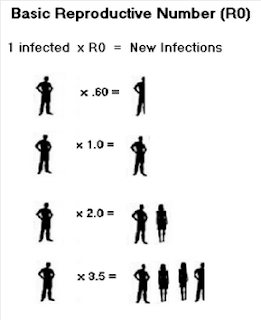 
Very high on the list of things we want to know about any emerging infectious disease is how well it transmits, and the measurement used is called the R0 (pronounced R-naught), or the Basic Reproductive Number.

Essentially, the number of new cases in a susceptible population likely to arise from a single infection.

But the R0 is notoriously difficult to calculate, requires reams of detailed epidemiological and serological data, and researchers continue to argue over the R0s of epidemics long past.


And while a useful number, at best it provides an `average' number of new cases likely to be infected by any one individual.

Between variability in a patient's viral shedding, and differing opportunities for close contact with others, there will always be outliers on either side of the expected R0.


The R0 of MERS in Saudi Arabia has generally been calculated at less than 1.0 (see The Elusive R0 of MERS), although the growing number of asymptomatic infections, and some recent community seroprevalence studies, could eventually help to revise that number.

While community spread of the virus appears relatively subdued, hospitals have proved to be very efficient amplifiers of outbreaks.


Nowhere has that been better studied than in South Korea, where last summer one infected traveler sparked a multi-facility epidemic that eventually infected at least 185 others.


Remarkably, just two patients (#1 Index case and case #14) - aided and abetted by extended stays in overcrowded Emergency Rooms - are linked to the transmission of the virus to roughly 110 others, as part of an extended `superspreader' event.


First the link and abstract to the Lancet Study, after which I'll have a bit more on the `superspreader' phenomenon.

In 2015, a large outbreak of Middle East respiratory syndrome coronavirus (MERS-CoV) infection occurred following a single patient exposure in an emergency room at the Samsung Medical Center, a tertiary-care hospital in Seoul, South Korea. We aimed to investigate the epidemiology of MERS-CoV outbreak in our hospital.

We identified all patients and health-care workers who had been in the emergency room with the index case between May 27 and May 29, 2015. Patients were categorised on the basis of their exposure in the emergency room: in the same zone as the index case (group A), in different zones except for overlap at the registration area or the radiology suite (group B), and in different zones (group C). We documented cases of MERS-CoV infection, confirmed by real-time PCR testing of sputum samples. We analysed attack rates, incubation periods of the virus, and risk factors for transmission.

There were no confirmed cases in patients and visitors who visited the emergency room on May 29 and who were exposed only to potentially contaminated environment without direct contact with the index case. The main risk factor for transmission of MERS-CoV was the location of exposure.

Our results showed increased transmission potential of MERS-CoV from a single patient in an overcrowded emergency room and provide compelling evidence that health-care facilities worldwide need to be prepared for emerging infectious diseases.

Although we've evidence that some infected patients shed more virus than others (see Influenza Transmission, PPEs & `Super Emitters’), it generally takes the confluence of several factors to create a super spreading event.  According to Stein’s excellent 2011 review Super-spreaders in infectious diseases:

Super-spreading events are shaped by host, pathogen, and environmental factors. Often, more than one factor may be implicated in the same outbreak.

During the SARS outbreak of 2003 – which is generally considered to have been more infectious than MERS - studies found most patients would typically only infect 1 or perhaps 2 additional people, and often none at all.

But a small percentage of patients proved unusually efficient at spreading the disease, with some responsible for 10 or more secondary infections (see MMWR Severe Acute Respiratory Syndrome --- Singapore, 2003).


This SARS super spreader phenomenon gave rise to the 20/80 rule, that 20% of the cases were responsible for 80% of the transmission of the virus (see 2011 IJID study).


Super spreading events aren’t limited to SARS and MERS, as they have also been documented with measles, HIV, TB, S. aureus, Ebola, and various STDs . . .among others (cite).

While the host and the pathogen are important parts to the equation, the lesson in South Korea is environment and opportunity play huge roles in exacerbating these super spreader events.


Last summer, in TFAH Issue Brief: Preparing The United States For MERS-CoV & Other Emerging Infections, we looked at an issue brief prepared by TFAH (Trust for America’s Health) along with UPMC Center for Health Security  and the IDSA (Infectious Disease Society of America) on the actions the United States needs to take to prepare for the arrival of MERS and other emerging infections.

A couple of weeks later, we saw the HHS Launch A National Ebola Training & Education Center to help prepare medical facilities to deal with Ebola, along with other highly pathogenic viral diseases.


Reminders that every health care facility – large and small - needs to plan, train and equip themselves for the possibility that the next patient that comes through the ER entrance could be carrying something considerably more exotic and dangerous than seasonal flu.
Posted by Michael Coston at 9:36 AM