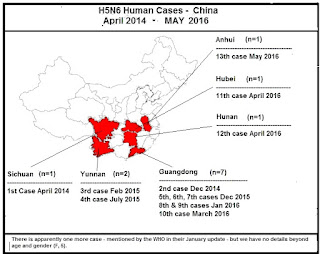 
Although we only know of 15 human infections with the H5N6 virus - which first appeared a little over 2 years ago in Sichuan Province - fully 1/3rd of those cases (n=5) occurred in just over a month's time in Guangdong province last December & January.

In fact, in the 18 months prior to last December, only 5 cases had been reported.  Between December and May, that number tripled.


This sudden increase is likely due to two factors.  An increasing geographic range of the virus, and evolutionary changes to the H5N6 virus itself.


We recently looked at the dispersal and spread of the H5N6 virus via migratory birds in Nature: Origins and Evolution of HPAI H5N6, while the recent changes to the virus was the subject of EID Journal: Novel Reassortant H5N6 Viruses In Humans, Guangdong China.


Viruses sequenced last December showed that H5N6 has reassorted with other avian flu viruses (both H9N2 and H6N6), and suggest there may be other - as yet undetected - H5N6 reassortants in the wild and others may yet emerge.

Additionally, two of the three 2015 isolates also appear to have picked up genes for amantadine (an older antiviral) resistance, that were not present in 2014.


As we've discussed previously (see here, here, and here), the common denominator between nearly all of the avian viruses (including H5N1, H5N6, H10N8 and LPAI H7N9) that have emerged from China in recent years is that their internal genes can be traced back to the ubiquitous LPAI H9N2 virus.


LPAI H9N2 is rife in Asian (and Middle Eastern) poultry, and over the past 5 years we've seen evidence not only of its impact on other avian viruses, but of its own evolution, including last month in J. Virol: PA Mutation K356R in Avian H9N2 Increases Mammalian Replication & Pathogenicity.

Simply put, H9N2 not only gets around, it is getting better at infecting mammalian hosts. While producing relatively mild illness on its own accord, when it reassorts with H5 or H7 subtypes, it has the ability to produce formidable flu strains. 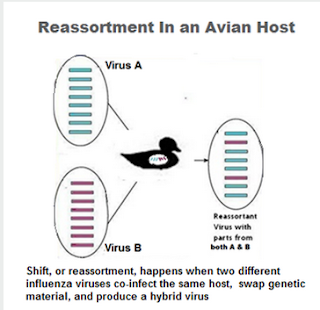 All of which serves as prelude to a new new report, published in Emerging Microbes & Infections, that monitored Guangdong Province's Live Bird Markets (LBMs) prior to - and during - last winter's surge in human H5N6 cases.


This study makes note of both the spread & evolution of H5N6, and makes the point that LBMs in general - and the H9N2 virus in particular - are important factors driving China's avian flu problems.


While both are points we've looked at before, the discussion section puts it quite succinctly:

LPMs act as sites for the mixing of avian influenza viruses and play important roles in viral reassortment and human infection.25, 26, 27, 28, 29, 30

In the present study, the H9N2 virus provided internal genes for H5N6 viruses that were also found in the in H7N9 and H10N8 viruses. These findings suggest that the H9N2 virus might be the key contributor to the genesis of novel virus genotypes in poultry.31


You'll find the link to this open access study and the abstract below, but you'll want to follow the link to read this report in its entirety.

Sporadic human infections with the highly pathogenic avian influenza (HPAI) A (H5N6) virus have been reported in different provinces in China since April 2014. From June 2015 to January 2016, routine live poultry market (LPM) surveillance was conducted in Shenzhen, Guangdong Province.

H5N6 viruses were not detected until November 2015. The H5N6 virus-positive rate increased markedly beginning in December 2015, and viruses were detected in LPMs in all districts of the city. Coincidently, two human cases with histories of poultry exposure developed symptoms and were diagnosed as H5N6-positive in Shenzhen during late December 2015 and early January 2016.

Similar viruses were identified in environmental samples collected in the LPMs and the patients. In contrast to previously reported H5N6 viruses, viruses with six internal genes derived from the H9N2 or H7N9 viruses were detected in the present study. The increased H5N6 virus-positive rate in the LPMs and the subsequent human infections demonstrated that sustained LPM surveillance for avian influenza viruses provides an early warning for human infections.

Interventions, such as LPM closures, should be immediately implemented to reduce the risk of human infection with the H5N6 virus when the virus is widely detected during LPM surveillance.

Similar to human infections with the H5N1 and H7N9 viruses, people infected with the highly pathogenic avian influenza A (H5N6) virus develop severe symptoms, including pneumonia and acute respiratory distress syndrome, and thus the H5N6 virus poses a threat to humans.9, 12 LPM closures have been effective in the control of human risks of H7N9 and H5N1 virus infections.16, 34, 35

The risk of human infection might be reduced if related interventions, such as LPM closures, are immediately implemented when increases in the frequencies of viruses are widely identified in LPMs.

On the basis of our findings, we propose that the decision for LPM closures in Shenzhen city might need to be executed before December. Moreover, the supervision and information distribution by local public health facilities should be strengthened to prevent the unofficial trading of live poultry during LPM closure periods, which is often neglected in routine LPM management measures.