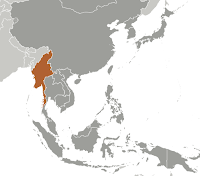 The AP and AFP are both reporting this morning on an unknown disease outbreak in a remote far northern region of Myanmar, very near the Indian border.

The AP report indicates this outbreak has been ongoing for two months, at least 30 children have died, and local officials have been unable to identify the disease.


Although `mystery' outbreaks can sometimes turn out to be from an emerging and exotic pathogen, most of the time, they prove to be far less mysterious once outside medical teams arrive and can begin testing.

We saw similar headlines last December in Indonesia: `Mystery Illness’ Kills 56 Children In Papua, an outbreak which was eventually determined to be due to a combination of Pertussis and pneumonia.


Myanmar continues to have one of the highest child mortality rates in the region (see IRIN : Myanmar's infant mortality woes), with an estimated 56,000 children dying before they reach the age of five each year.


Two reports, the first from AFP,  which cites 200 cases and 30 deaths, followed by the AP report.

Adults and children have both been struck since the outbreak first emerged in June, a local MP said, but the illness appears to be particularly deadly to children under the age of five.

"Altogether 23 children were have been killed in Lahal township and 13 killed in Nan Yon township since June because of this unknown disease," Law Yon, a regional MP from Naga self-administrative region told AFP.

"Rashes came out on their bodies, they have a fever and difficulty breathing because of coughing. Blood also comes out while coughing," he said.


At least 30 children dead in Myanmar from unknown disease


He said the deaths have been recorded in Nanyun and Lahe towns in the Naga region, one of the poorest in the country, about 1,300 kilometers (800 miles) from Yangon, adjoining India's Nagaland state. He said most of the victims have been younger than 5.

Kay Sai said officials have not been able to identify the disease, which appears to be contagious. Blood samples have been sent to a hospital in the neighboring Saggaing division and results are awaited. There has been no response from the Ministry of Health, or the Department of Prevention of Transmitted Diseases on the outbreak.


While these reports are both dramatic and tragic, and may point to an emerging virus, it is more than possible this outbreak is due to one of the common childhood viruses like measles or chickenpox, which nonetheless claim thousands of lives each year, particularly in low resource settings.

Hopefully we'll get some clarification on these reports soon.