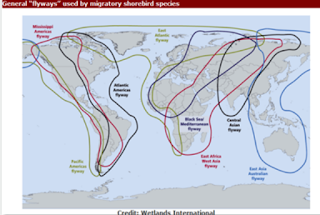 
Avian flu continues to move in mysterious ways, but one of its biggest mystery is why - after having run through North American poultry holdings during the spring of 2015 like flu through a goose - it failed to return for a repeat performance last fall.

Last month we looked at this surprising development (see PNAS: The Enigma Of Disappearing HPAI H5 In North American Migratory Waterfowl), that concluded that migratory waterfowl are not a reservoir for highly pathogenic avian flu viruses.


The lead author, Dr. Robert Webster said. "Existing immunity in wild birds is one of the possible explanations that may explain why highly pathogenic influenza A viruses do not become established in wild bird populations."

Of course, this is long-term carriage of HPAI viruses.

Yesterday, Scientific Reports published an analysis that finds that southbound migratory birds in the autumn - coming from their northern breeding sites - are more likely to spread HPAI than the northbound flocks in the spring.


The full report is open access, although the Nature.com server is reporting an error at this hour.   So you'll want to check back with them to download the full report.


First the abstract, then I'll return with a bit more.

The highly pathogenic avian influenza subtype H5N1 (HPAI H5N1) is a worldwide zoonotic infectious disease, threatening humans, poultry and wild birds. The role of wild birds in the spread of HPAI H5N1 has previously been investigated by comparing disease spread patterns with bird migration routes. However, the different roles that the southward autumn and northward spring migration might play in virus transmission have hardly been explored.

We suggest waterfowl first picked up the virus from East Asia, then brought it to the north via spring migration, and then spread it to other parts of world mainly by autumn migration.

Our own Arctic Refuge, where more than 200 bird species spend their summers, serves as a central hub, and funnels migratory birds south via all four North American Flyways. 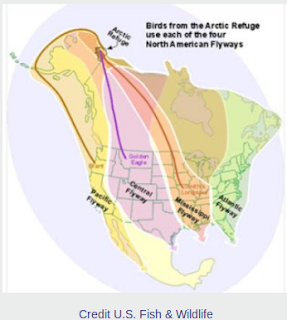 Although primarily comprised of North American birds that make the twice yearly north-south migration, this area is also overlapped by the East Asian flyway, which may allow birds from Siberia and Mongolia to intermix with our migratory bird population.

In 2008, a USGS study found Genetic Evidence Of The Movement Of Avian Influenza Viruses From Asia To North America, where we saw evidence that suggested migratory birds play a larger role in intercontinental spread of avian influenza viruses than previously thought.

All of which means we will have to be on guard again this fall for the possibility that HPAI will return to North America, Europe, and other regions along the world's migratory flyways.