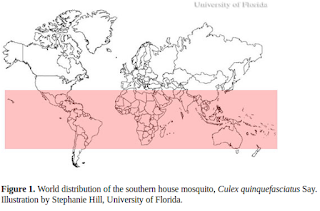 
Given the back-and-forth we've seen on this topic over the past few months (see here, here, and here) it may be a bit naive to assume we've heard the last on this, but we've another analysis - published yesterday in PLoS Neglected Tropical Diseases - that concludes the Culex quinquefasciatus is not  competent to transmit local strains of Zika.


Despite concerns raised earlier this summer (see Fiocruz: A Culex Mosquito With The Potential To Transmit Zika), we've now seen four studies (1 EID Journal, 2 Eurosurveillance, 1 PLoS NTD) conclude that Culex mosquitoes are not likely to be a competent vector for Zika.


The open access study can be read in its entirety at the link below, but I've reprinted the author's summary.

The pandemic Zika epidemic has affected nearly all American countries. The etiological agent is a mosquito-borne-virus originated from Africa that spread to Asia and more recently, to the Pacific region and the Americas.

We experimentally demonstrated that the common house nightly biting mosquito Culex quinquefasciatus from Rio de Janeiro was not susceptible to locally circulating Zika virus (ZIKV) strains. Dissemination was not observed in Cx. quinquefasciatus regardless of the ZIKV isolate used and the incubation period after the ingestion of an infected blood meal.

No infectious ZIKV particle was detected in the saliva of the four Cx. quinquefasciatus populations examined until 3 weeks after virus exposure. In contrast, we confirmed that local Aedes aegypti mosquitoes can be infected, disseminate ZIKV at significantly high rates, and assured moderate to very high viral transmission after day 14 of virus exposure.

We concluded that Cx. quinquefasciatus is not competent to transmit local ZIKV. Our results support that mosquito control should focus on Ae. aegypti to reduce Zika transmission.