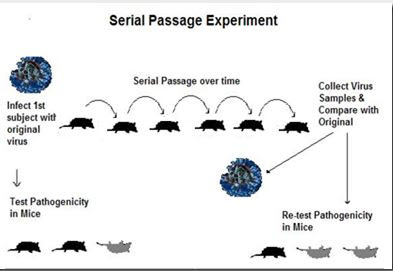 
As negative-sense single-stranded segmented RNA viruses, influenza A viruses are prolific, but sloppy replicators. They make millions of copies of themselves while they infect a host, but in the process, often make small transcription errors.


Allowing minor amino acid substitutions that can change the way the replicated virus acts to emerge.


Often, these changes are of little or no effect, or may even be detrimental to the survival of the virus. Those that favor replication in the host, however, tend to carry on to produce more progeny, and if `fit enough', can drown out the earlier `wild type’ virus in the host.
This process is called host adaptation, and while it can (and does) happen in the wild, it can be easily simulated in the laboratory as well via a classic serial passage study (see chart above).

You simply inoculate a host with a `wild type’ strain of a virus, let it replicate awhile, then take the virus from the first host and inoculate a second, and then repeat the process five, ten, fifteen times or more.


Over time, the virus tends to adapt to the new host (assuming there are no species barriers to prevent it).


A little over two years ago, in Serial Passage Of H5N2 In Mice, we looked at just such an experiment, published in the Veterinary Microbiology journal. In that case, researchers used an H5N2 virus collected in 2010, and found increased virulence and replication efficiency after just 15 serial passages

At the time that experiment had been run, H5N2 was only a second or third tier threat. Unlike H5N1 and H7N9, HPAI H5N2 had shown only limited evidence suggesting that it could infect humans.

But in 2014, after the spread H5N8 out of China and Korea to both Europe and North America, we began to see new HPAI H5N2 reassortants appear.

Although human infections have not yet been reported, this growing diversity and proliferation of HPAI H5N2 has raised the level of concern, and in 2015 H5N2 [A/Northern pintail/Washington/40964/2014] was added to the CDC's IRAT pandemic risk table. 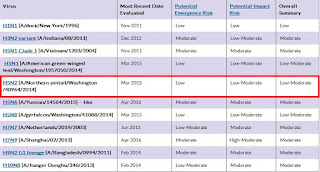 While still lagging far behind H5N1, H7N9, and H5N6 in the human threat department, H5N2 is increasingly on our radar.

All of which brings us to a new serial passage experiment - done this time with a more recent H5N2 isolate collected from an apparently healthy duck at a Chinese live poultry market (LPM) in 2013 (A/duck/Zhejiang/6DK19/2013 (H5N2)).


The full, open-access report is available from the Journal of Virology, and is very much worth reading.  Below you'll find the link and abstract.

I'll have a postscript when you return.

H5N2 avian influenza viruses (AIVs) can infect individuals that are in frequent contact with infected birds. In 2013, we isolated a novel reassortant highly pathogenic H5N2 AIV strain [A/duck/Zhejiang/6DK19/2013(H5N2) (6DK19)] from a duck in Eastern China. This study was undertaken to understand the adaptive processes that led enhanced replication and increased virulence of 6DK19 in mammals. 6DK19 was adapted to mice using serial lung-to-lung passages (10 passages total). The virulence of the wild-type virus (WT-6DK19) and mouse-adapted virus (MA-6DK19) was determined in mice. The whole-genome sequences of MA-6DK19 and WT-6DK19 were compared to determine amino acid differences.

Our results suggest that these substitutions are involved in the enhanced replication efficiency and virulence of H5N2 AIVs in mammals. Continuing surveillance for H5N2 viruses in poultry that are carrying these mutations is required.

Mice are widely used to study the pathogenesis of AIVs [25, 31]. Several amino acid substitutions including PB2 (Q591K and D701N), polymerase acidic protein (PA) (I554V), HA (S227N), and NP (R351K) have been described in mouse adapted H5N2 AIVs that have increased virulence and enhanced replication kinetics in mice and cell lines [20].

In this study, amino acid substitutions, in the PB2 (E627K), PB1 (I181T), HA (A150S), NS1 (WRNKVAD was extended at the C-terminal of the protein), and NS2 (E69G) proteins were identified in a MA-6DK19. These changes were associated with increased virulence compared with the wild-type virus, and the mouse-adapted virus became lethal in mice.

These results provide insights into the pathogenic potential of novel reassortant H5N2 AIVs in mammals, and suggest that continued H5N2 molecular epidemiology studies are critical to understand the variability and evolutionary mechanisms of AIVs.


Despite these findings, H5N2 is still generally regarded as posing a low level threat to human health.  We've yet to see the virus produce serious human illness.


Of course, the same thing could have been said about the H7 family of avian flu viruses only four years ago, before H7N9 emerged in China.


If there is one thing you can count on with influenza viruses, it is that they are continually changing. Yesterday's benign virus can quickly become a serious public health threat.


And so we watch their progress carefully, looking for signs of further adaptation to mammalian hosts.
Posted by Michael Coston at 8:33 AM