Colombian MOH: Increase In Child Deaths Due To ARI


A visit to the Colombian MOH website reveals the following press release, after which I'll return with more on ARIs in general.

A extreme measures of prevention and management of acute respiratory infection

​- The National Institute of Health reported 468 deaths of children under 5 years associated with this disease.

In this regard, the director of Epidemiology and Demography of the Ministry of Health and Social Protection, Sandra Lorena Vargas Girón, noted that the number of reported cases increased by 11.5 percent over the same period of the previous year. "Organizations like Tolima, Meta, Putumayo, Vichada, Guainía and Vaupés show a significant rise, contributing 12.7 percent of all reported cases (58). 123 deaths have been reported in indigenous population, which corresponds to 26,3 percent of the national report ".

However, the behavior in the general population has been opposed because it decreased the reporting of cases of ARI in outpatient services, emergency room and hospitalizations. "It is worth noting that health professionals should provide information on the warning signs of acute respiratory infection and severe acute respiratory infection (SARI), following the clinical guidelines atenció ( http://gpc.minsalud.gov.co/ gpc / SitePages / buscador_gpc.aspx .) ".

Girón Vargas stressed the need to strengthen public health actions against surveillance, prevention, control and management of acute respiratory infection, according to the provisions of Circular 032 8 June 2016. it also recommended to the general population to avoid contact with sick people, protect children from sudden temperature changes, keep your hands clean by proper washing, not self - medicate and stay hydrated while remaining symptoms, among other.

Increase fluid intake.
Frequent hand washing with soap and water.
Avoid rubbing your eyes and shake hands or kiss.
Cover your mouth when coughing or sneezing with the inside of the elbow.
Prefer to use paper towels to contain respiratory secretions.
Wear a mask or masks in over 3 years old.
Ventilate the house daily and rooms.
Avoid places where there conglomeration of people and work, kindergarten, school or universities.
When consulting health centers?

Persistent fever after 3 days
When you eat little or nothing or when or vomits everything
Sinking presence ribs when breathing
Presence of noises in the chest
Rapid breathing.

As we've discussed many times in the past, while influenza gets the bulk of our attention each fall and winter, there's a myriad of respiratory infections - mostly (but not entirely) viral - that can cause severe illness, particularly in children.


The usual suspects include adenoviruses, rhinoviruses, respiratory enteroviruses, RSV, and parainfluenza viruses,  among others.


This plethora of pathogens is illustrated extremely well in a graphic by Dr. Ian Mackay, which he used on his excellent Virology Down Under Blog entry called Respiratory viruses: the viruses we detect in the human respiratory tract. 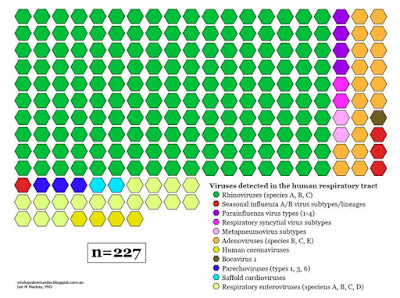 While these viruses often precede or follow the seasonal flu season, they can also circulate when influenza is at its height, meaning that `flu' you got last year despite getting the flu shot may not have been influenza after all.

During the fall of 2009, at the height of the H1N1 pandemic in the United States, I highlighted the following CDC graphic in a blog called ILI’s Aren’t Always The Flu, that showed that 70% of the samples taken from symptomatic patients tested negative for influenza. 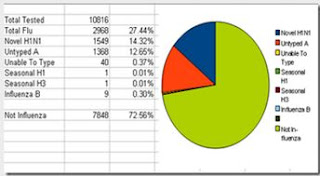 Hopefully we'll get some kind of reading as to what is behind this increase in ARI deaths in Colombia, but sadly, it doesn't require a novel or exotic virus to spark an outbreak.

According to the World Lung Association, Acute respiratory infections (ARIs) are the leading global killer of children under five, with pneumonia alone responsible for almost 1.6 million deaths annually.


Given how bad it is in Colombia, one can only wonder what the ARI situation is like in neighboring Venezuela, where an economic and political crisis has all but halted public health services, and people are reportedly desperate for food and medicine.