Getting Ready For The Great American Shakeout


Last September, during National Preparedness Month, we looked at the seismic risks in the United States in #NatlPrep: Half Of All Americans Need An Earthquake Plan. As the USGS map below illustrates, tens of millions of Americans live in earthquake zones. 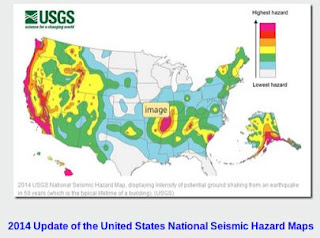 While it’s been more than 20 years since the last major destructive quake in the United States (Northridge 1994), the geological clock keeps on ticking down towards the next big seismic event.  Another big quake is inevitable.

All of which makes it imperative that families and businesses have the the supplies on hand to withstand the aftermath of a large earthquake. But it is just as important to know what to do while the earthquake is happening.


Starting nine years ago with a fairly modest Great Southern California Shakeout Drill, ShakeOut.org has promoted earthquake awareness, preparedness, and safety in scores of regions across the country and around the world, and will do so again next week ( on October 20th) in 2016's Great Shakeout Earthquake Drill.

OSU: Pragmatic Action - Not Fatalism - In Order To Survive The `Big One’

This year more than 50 million people are expected to take part globally, and you are invited as well. You should consider taking part, even if you don’t live in a high-risk seismic region.


You might just find yourself visiting an earthquake susceptible area someday, and need to know what to do during a quake.

No matter where you live, FEMA, Ready.gov, and other agencies urge that everyone have - at a bare minimum -  a well thought out disaster and family communications plan, along with a good first aid kit, a `bug-out bag’, and sufficient emergency supplies to last at least 72 hours.

But in a major disaster, you may very well wish you’d done more.


In When 72 Hours Isn’t Enough, I highlighted  a colorful, easy-to-follow, 100 page `survival guide’ released by Los Angeles County, that covers everything from earthquake and tsunami preparedness, to getting ready for a pandemic.


The guide may be downloaded here (6.5 Mbyte PDF).


While designed specifically for the nearly 10 million residents of Los Angeles County, this guide would be a valuable asset for anyone interested in preparing for a variety of hazards. And in Los Angeles, the advice is to have emergency supplies (food, water, etc) to last up to 10 days. In my humble opinion, 2-weeks in an earthquake zone isn’t overkill.

As you work to better prepare your home, business, and family to deal with an earthquake (or any other major disaster), I would If I would strongly encourage you to visit ShakeOut.org and to take part in next week’s drill.


For more on earthquakes, and earthquake preparedness, you may wish to revisit:

Estimating The Economic Impact Of A San Andreas Quake

Posted by Michael Coston at 9:36 AM