Indonesian Media: An Unusual Report Of H5N1 in Pigs 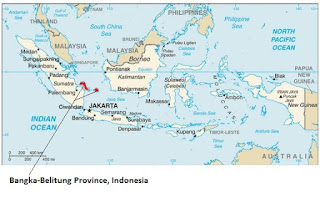 
We occasionally see reports of poultry outbreaks, but only two human H5N1 infections have been reported in the past 18 months.


Yesterday, however, Crof picked up a report that H5N1 kills dozens of ducks in North Sulawesi, while this morning we have multiple media reports of an outbreak on the islands of Bangka Belitung province reportedly involving chickens, ducks, and somewhat unusually . . . pigs.


While H5N1 has been detected in swine before, it has been a fairly rare occurrence.


Since media reports on avian flu out of Indonesia have - in the past - not always been the most reliable, until we get official confirmation, I'd strongly recommend Caveat Lector.

First a translation of one of the media reports, then I'll be back with more on H5N1 in pigs. This report appears on Netral News, but similar reports can be found published by Antara/AFP.

Cases of Bird Flu in Poultry and Swine, Found in Bangka Barat

He explained that the examination was conducted in District Muntok in two locations: in Gang Breadfruit RT 03 RW I and in Puput precisely behind the Company, discovered the case of chickens.

He explained that the dangerous new viruses found in animals, while from an examination of the man has not been found or negative, but it continues to supervise the residents around the scene.

From the results of the examination, the entire poultry tested positive for everything immediately destroyed by burning.

Since H5N1 infection in pigs has only been rarely reported, and not to my knowledge in recent years, I'm understandably a little leery of this report. Still, there are precedents.


As early as 2004 the World Health Organization reported H5N1 in Chinese swine (see Avian influenza: H5N1 detected in pigs in China), sparking concerns over potential mammalian adaptation of the virus.


A 2008 study appearing in PLoS Pathogens found Domestic Pigs Have Low Susceptibility to H5N1 Highly Pathogenic Avian Influenza Viruses. While they could be experimentally infected, pigs demonstrated only mild disease, and did not shed the H5N1 virus as copiously as swine flu viruses.

Pigs have long been considered potential intermediate hosts in which avian influenza viruses can adapt to humans. To determine whether this potential exists for pigs in Indonesia, we conducted surveillance during 2005–2009. We found that 52 pigs in 4 provinces were infected during 2005–2007 but not 2008–2009. Phylogenetic analysis showed that the viruses had been introduced into the pig population in Indonesia on at least 3 occasions.

One isolate had acquired the ability to recognize a human-type receptor. No infected pig had influenza-like symptoms, indicating that influenza A (H5N1) viruses can replicate undetected for prolonged periods, facilitating avian virus adaptation to mammalian hosts. Our data suggest that pigs are at risk for infection during outbreaks of influenza virus A (H5N1) and can serve as intermediate hosts in which this avian virus can adapt to mammals.


The concerns over finding H5N1 in pigs are actually two-fold.

The first is the potential for host adaptation of the virus.  The serial passage of an avian virus from pig - to pig - to pig can, over time, allow genetic traits to emerge that make the virus more adapted to mammalian hosts (see Virology J : Adaptation Of HPAI H5N2 In Mice).

The second concern is viral reassortment. 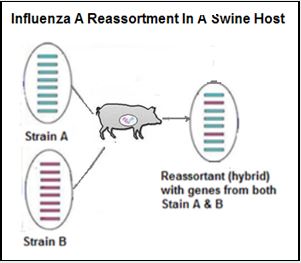 Since pigs are susceptible to human, avian, and swine flu viruses, and can be infected by more than one virus at the same time, there is the potential for two viruses (say H5N1 and H1N1) to swap genes and produce a new hybrid subtype.

Granted, this doesn't happen often, and most of the time the result is an evolutionary failure, unable to compete with the parental viruses.  But every once in awhile a new, `biologically fit' virus will emerge (see NIAID Video How Influenza Pandemics Occur).

In 2004, after the announcement by the Chinese of the discovery of H5N1 in pigs, the WHO released a statement called Avian influenza - update: Implications of H5N1 infections in pigs in China  which warned:


The chances for genetic reassortment depend upon both the duration of H5N1 circulation in pigs as well as the simultaneous presence of human and pig influenza A viruses (such as H3N2 or H1N1). As long as human and avian influenza viruses are co-circulating - whether in humans or in pigs - the possibility of an exchange of genetic material-exists.


We've managed to dodge that evolutionary bullet for a dozen years, so perhaps the concerns are over stated.  But if - as the Indonesian report suggests - the H5N1 virus is circulating in local pigs, the risks are not zero.

Hopefully we'll get some official statement or clarification on these reports.
Posted by Michael Coston at 8:01 AM