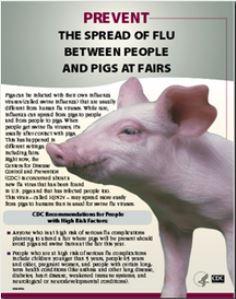 
Last August, over a period of several weeks, we followed the reports of 18 people - all fair attendees - who were diagnosed with a swine variant influenza virus called H3N2v in two states; Michigan and Ohio.  Among those blogs:


This was the biggest outbreak of swine variant infections we'd seen since 2012, when more than 300 cases were reported across 10 states.  The CDC describes Swine Variant viruses in their Key Facts FAQ.

What is a variant influenza virus?


These swine variant viruses are a concern because one could someday become well enough adapted to human physiology to transmit efficiently in the community - which is essentially what happened in 2009 when the pandemic H1N1 virus emerged.

Today the MMWR carries our first detailed look at the investigation into this summer's outbreak, along with a genetic analysis of the viruses isolated.


The `headline' in this report is that 16 of the 18 cases analyzed belonged to a new genotype not previously detected in humans. The reports explains:


Whereas these viruses contained seven gene segments similar to segments detected in previously reported variant virus outbreaks, one gene segment coding for an influenza A(H3) hemagglutinin (HA) gene was determined to be similar to HA genes found in human seasonal influenza A(H3N2) viruses from 2010 and 2011.

This HA gene was likely introduced from humans into swine in 2010 or 2011, and has since circulated and evolved in swine to be genetically and antigenically different from both previous and currently circulating human seasonal influenza A(H3N2) viruses (3).


The full report is very much worth reading, and it highlights the need to prevent transmission of influenza viruses both to, and from, pigs.


Due to its length I'll only post some excerpts. Follow the link to read the report in its entirety.   When you return, I'll have a bit more:


On August 3, 2016, the Ohio Department of Health Laboratory reported to CDC that a respiratory specimen collected on July 28 from a male aged 13 years who attended an agricultural fair in Ohio during July 22–29, 2016, and subsequently developed a respiratory illness, tested positive by real-time reverse transcription–polymerase chain reaction (rRT-PCR) for influenza A(H3N2) variant* (H3N2v). The respiratory specimen was collected as part of routine influenza surveillance activities. The next day, CDC was notified of a child aged 9 years who was a swine exhibitor at an agricultural fair in Michigan who became ill on July 29, 2016, and tested positive for H3N2v virus at the Michigan Department of Health and Human Services Laboratory. Investigations by Michigan and Ohio health authorities identified 18 human infections linked to swine exhibits at agricultural fairs.

To minimize transmission of influenza viruses from infected swine to visitors, agricultural fair organizers should consider prevention measures such as shortening the time swine are on the fairgrounds, isolating ill swine, maintaining a veterinarian on call, providing handwashing stations, and prohibiting food and beverages in animal barns. Persons at high risk for influenza-associated complications should be discouraged from entering swine barns.

What is already known about this topic?

Sporadic human infections and outbreaks with influenza viruses that normally circulate in swine have occurred in the past. The largest known outbreak of H3N2v virus infections occurred in 2012.

What is added by this report?

In August 2016, 18 laboratory-confirmed infections with H3N2v virus were reported among persons who had attended agricultural fairs in Michigan and Ohio. Sixteen of the 18 cases occurred in persons who were infected with a reassortant H3N2v virus that contained a hemagglutinin (HA) gene previously not detected in variant viruses.

The HA gene was likely introduced from humans into swine in 2010 or 2011, and viruses with this gene have circulated and evolved in swine to be genetically and antigenically different from both previous and currently circulating human seasonal influenza A(H3N2) viruses.

What are the implications for public health practice?

To minimize transmission of influenza viruses from swine to humans and from humans to swine, agricultural fair organizers should consider measures such as shortening the time swine are on the fairgrounds to ≤72 hours, immediately isolating ill swine, maintaining a veterinarian on call for the duration of the swine exhibition, providing prominent handwashing stations, and prohibiting food and beverages in animal barns. Persons at high risk for influenza-associated complications should be discouraged from entering swine barns.


Of the three swine variant strains reported in the United States (H1N1v, H1N2v, & H3N2v), H3N2v has been by far the most common, making up 95% of all reported cases.


Since the influenza subtypes that commonly circulate in swine are also the same that have caused all of the human pandemics going back 130 years (see Are Influenza Pandemic Viruses Members Of An Exclusive Club?), they are generally regarded as having less far to `jump’ to humans than do many avian viruses.

Which is why we watch reports like today's with particular interest. For more on swine variant viruses, both in the United States and around the world, you may wish to revisit:

Posted by Michael Coston at 1:58 PM