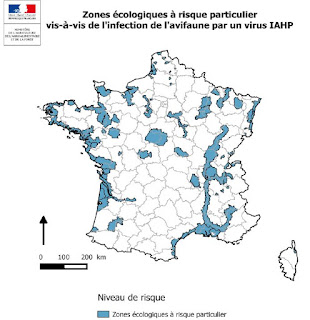 
Although HPAI H5N8 has not yet been reported within the borders of France, it continues to spread rapidly across Europe and has been reported in neighboring Switzerland, very near the French border (see Switzerland: FSVO Confirms H5N8 Now Detected At Lake Geneva).


France's poultry industry - particularly in the southern region - has been plagued with both LPAI and HPAI outbreaks over the past 12 months from five recently emerged European lineage H5 viruses (see DEFRA: Update On HPAI & LPAI Avian Flu Outbreaks in France).


All of which has the Ministry of Agriculture and the poultry industry on high alert. Today the MOA has issued a communique, along with a map of high risk areas (near migratory nesting grounds), on measures to protect farms.

Following the discovery of new cases of highly pathogenic avian influenza H5N8 in several European countries [1] , and on the basis of an opinion of the Anses , the Ministry of Agriculture, food and Forestry has decided to take vis-à-vis the level of risk of disease "negligible" to "moderate" on the entire national territory.

The case recently detected in other European countries particularly affecting migratory birds, the ministry also raised the level of risk in wet areas that concentrate wildlife and constitute stops on the route of migratory birds. In these areas called "ecological areas with special risk" (see map below), vis-à-vis risk from avian influenza is now described as "high."

This elevated risk levels led to implement on the territory of enhanced biosecurity measures, defined by the order of 16 March 2016, to avoid any possible incursion of this new virus in the country.

These enhanced biosecurity measures, with obligatory confinement or netting to prevent contact with wild birds, apply in areas where the risk level is high:

Moreover, this decree imposes specific constraints on the use of calls for hunting waterfowl, game releases birds or pigeons. In particular in ecological areas in particular risk, the feathered game releases and the caller displacement is prohibited.

Bird gatherings (fairs, shows) are also subject to restrictions; in particular, the competition pigeons are banned.

The Ministry of Agriculture, Food and Forestry stresses the importance for the poultry industry of these mandatory prevention measures which are intended to protect us from the introduction in France of this new virus of avian influenza .

The vigilance of everyone is called to report any mortality in wild birds.

Posted by Michael Coston at 6:48 AM