Not quite two months ago, in FAO/EMPRES: H5N8 Clade 2.3.4.4 Detected Over Summer In Russia, we looked at the FAO's concerns over HPAI H5N8 making it not only into Europe, but also the Middle East and possibly West Central Africa as well.


The migratory bird pathways (see map below) that have funneled - first H5N1 and now H5N8 - from Asia to Western Europe, also extend to the Middle East and beyond.

The FAO again voiced concerns only a week ago, in FAO On HPAI H5's 4th Intercontinental Wave,  listing the following regions as at risk of seeing the arrival of H5N8.

With H5N1 already well-entrenched in both the Middle East and West Africa, the introduction of another highly pathogenic avian virus could produce considerable, and potentially unpredictable,  complications.


Yesterday, Israel reported finding an HPAI H5  in the Jezreel Valley, today the OIE is reporting it to be HPAI H5N8. 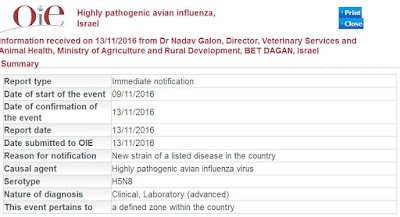 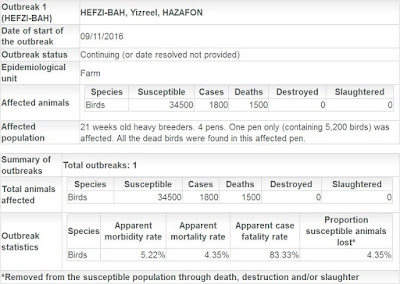 Epidemiology
Source of the outbreak(s) or origin of infection

Measures to be applied


While not completely unexpected - given the previous diaspora of H5N1 out of Asia in the middle of the last decade - the spread of H5N8 has progressed faster, and farther, than anyone really thought likely.


An additional concern has to be the promiscuous nature of H5N8, which has managed to reassort with a variety of local (usually low path) avian viruses, and has generated several viable viruses in North America and Asia.


As the virus expands its range, it also increases its interactions with other avian influenza viruses, potentially setting the stage for additional reassorted viruses to emerge.