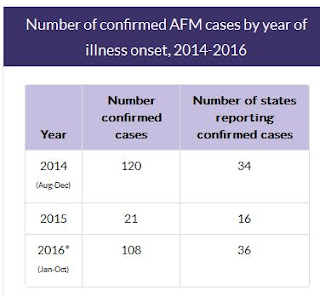 
We've been following an increase in Acute Flaccid Myelitis (AFM) cases across the country over the past few months (see here, here , and here), for which the CDC does not yet have an explanation.

Acute flaccid myelitis (AFM) is a rare illness that affects a person’s nervous system, specifically the spinal cord. AFM may be due to a variety of causes, including viral infection.

AFM is a subset of conditions that fall under a broader `umbrella' of syndromes called Acute Flaccid paralysis (AFP), which may include myelitis, peripheral neuropathy, myopathy, Guillain-Barré syndrome (GBS), toxic neuropathy, and other muscle disorders.

The (Updated Dec 1st) chart at the top of this blog shows that so far this year, the CDC has identified 108 cases of AFM from 36 states, a more than 500% increase over 2015, with 19 new cases reported in October. 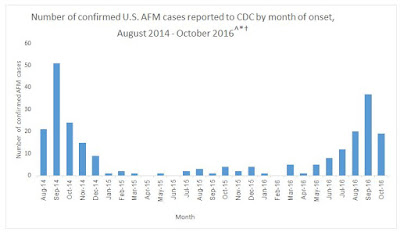 The initial surge in cases began in August of 2014, concurrent with a nationwide outbreak of EV-D68, a relatively rare non-polio enterovirus that sparked mild to moderate respiratory illness, mostly among children and teenagers.


While a circumstantial case has been posited to link AFM to EV-D68 over the past couple of years (see EID Journal  Enterovirus D68 Infection in Children with Acute Flaccid Myelitis, Colorado, USA, 2014), no definitive causal link has been established.


There are many other viruses - including EV-71, West Nile Virus, cytomegalovirus and Epstein-Barr virus, along with some of the  adenoviruses - that are known to cause similar neurological symptoms. Although some sporadic cases of EV-D68 infection have been reported this year, earlier in the year the CDC stated:


There is no indication of unusual activity. Enteroviruses are ever-present in the community, and each year we expect to detect cases.

That said, we've also been following enterovirus outbreaks around the globe, including new introductions of EV-71 into Europe and a general increase in EV-D68, including:

EID Journal Upsurge In EV-D68 In The Netherlands, 2016

While some cases of AFM are probably due to severe enterovirus infection, we are still left with the mystery as to what is driving this subtantial rise in AFM cases across the nation.


Some excerpts from the December CDC Update:

AFM in the United States

What we know about the AFM cases reported since August 2014:


What We Don't Know

What we don’t know about the AFM cases reported since August 2014:
See Prevention for information about how to protect your family from viral infections that may cause AFM.


What CDC Is Doing

CDC is actively investigating the AFM cases and monitoring disease activity. We are working closely with healthcare providers and state and local health departments to increase awareness and reporting for AFM, and investigate the AFM cases, risk factors, and possible causes of this illness.
CDC activities include:

Posted by Michael Coston at 6:46 AM