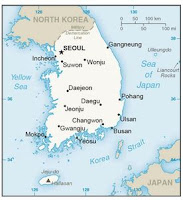 
Yesterday, in Korea MAFRA: Avian Flu Suspected In Cat Deaths,
we looked the official report of 4 cats found dead this week in Pocheon, Gyeonggi Province. Testing was reportedly underway for the exact cause, although a preliminary test had indicated influenza.


Since it is both Saturday, and New Year's Eve in Korea, it is not terribly surprising that neither the MAFRA nor the Korean CDC website have posted the results.


What we do have are several media reports indicating the tests have come back positive for HPAI H5N6.  While not unexpected, this is the first detection of HPAI jumping to a Korean mammal since several dogs tested positive for H5N8 antibodies in 2014 and early 2015.

First excerpts from an English Language report from Yonhap News, after which I'll be back with more.

The H5N6 strain of avian influenza (AI) which has infected chickens across the country was found in the bodies of the cats in Pocheon, some 46 kilometers north of Seoul, the official said, citing information from health authorities.

Health authorities said that they are looking at samples to verify whether they were infected with a more highly pathogenic strain of AI.

"Even if it is the same N6 strain, there are some differences in gene structure," the official said. "We are awaiting test results."


While only rarely reported, we've seen cats infected by HPAI H5 viruses before, most famously affecting (and sadly, killing) rare tigers and leopards which were accidentally fed infected chicken in South East Asian Zoos early in the last decade.

The following comes from a World Health Organization GAR report from 2006.


In 2006, Dr. C.A. Nidom demonstrated that of 500 cats he tested in and around Jakarta, 20% had antibodies for the bird flu virus,
while in 2012 we saw Israel: Cats Infected With H5N1, and just last May, in Fatal H5N1 Infection In Tigers By Different Reassortant Viruses - China we looked at a series of large cat infections over 2014-2015.

There are other examples, but suffice to say the infection of cats by HPAI H5N6 isn't unprecedented.  It is, however, concerning.


Bird flu viruses are primarily adapted to avian physiology, and (so far) have only demonstrated a limited ability to infect, and be transmitted between, mammals.


Avian viruses bind preferentially to the kind of receptor cells commonly found in the digestive and respiratory tracts of birds; alpha 2,3 receptor cells, and replicate most efficiently at the higher temperatures found in that species.


When avian flu viruses do manage to jump to mammals - whether that be cats, dogs, rodents, or humans - it gives the virus another opportunity to adapt to a mammalian host; to bind to alpha 2,6 receptor cells, found in the respiratory system, and to replicate at lower temperatures.


The virus has had numerous opportunities to do this in the past, and it hasn't succeeded, so some hope there may be some genetic `species barrier' preventing it from ever happening.

While a comforting thought, few scientists put a lot of faith in that idea.


It may just be that the right roll of the genetic dice, in the right host - which happens to be in the right place to spread the mutated virus in a sustained fashion - just hasn't happened, yet.

Regardless of whether HPAI H5N6 (or any of its AI cousins) ever adapts to humans, its presence in small peridomestic (and domestic) animals - like cats, dogs, mice, voles, and other small mammals - may be helping it spread from farm to farm.
All of this becomes all the more important with clade 2.3.4.4. H5 viruses now appearing to spread more readily among wild and migratory birds, increasing the opportunities for small mammals to come in contact with the virus, and potentially spread it to farms.

While the detection of HPAI H5N6 in cats isn't necessarily alarming, it does have the potential to make it tougher for Korea (and other governments) to contain and eradicate outbreaks.

Posted by Michael Coston at 7:27 AM