Two weeks ago (see Chile Culling Turkeys Over H7 Avian Flu) we saw a large outbreak over LPAI H7 which required the culling of roughly 34,000 birds.  Low path H5 & H7 viruses are taken very seriously because they have the potential to mutate into HPAI strains, and so they are reportable to the OIE, and require immediate action to stamp out.

Today, Chile's SAG (Agriculture and Livestock Service) has announced a second turkey farm - which they describe as `directly related' to the first outbreak- has tested positive for the virus, and another 35,000 turkeys will  have to be destroyed.

Santiago, January 18, 2017.- The Agriculture and Livestock Service confirmed the diagnosis of avian influenza in a turkey farm second fattening Sopraval located in the El Melon district of Nogales, in the region of Valparaiso .

Although there has been no mortality in birds and only respiratory signs have been observed from January 16, they began to take steps to isolate the site and remove any presence of virus. According to research SAG, this new event is directly related to the focus identified two weeks ago in Quilpué, so that the above measures have simply been extended to the new zone.

The SAG took samples immediately after observed respiratory signs, which were analyzed in the official laboratory of the Service, confirmed Tuesday 17, the presence of avian influenza H7. According to history, it would be a low pathogenic virus, which is confirmed by the fact that there have been no bird deaths.

Along with the above, all protocols exist to prevent the spread of the virus biosafety were triggered, and the immediate slaughter of about 35,000 turkeys of the sector, the sanitary landfill in the same place and the implementation of actions determined disinfection.

Parallel additional monitoring plan started to every bird of the area to detect any leakage of the virus outside the farm. It should be noted that following the case detected in the commune of Quilpué, SAG has performed the sampling of all poultry farms and backyards of the affected area (over 8,000 samples to date), the results were all negative for the virus.

The effort to eliminate the focus quickly is because it is an exotic disease of importance to the health and production of domestic and wild birds. From the point of view of the health of the population, this event no risk, since the consumption of their meat and byproducts transmission is of no danger to people. Otherwise, all poultry farms in the country are monitored, the disease having negative results, confirming that domestic production is commercially maintains the highest standards of health worldwide.


Somewhat remarkably, with as much HPAI that has been reported around the world over the past 12 years, the OIE has no reports of highly pathogenic avian flu in South America (see OIE Map from Jan 2005-Present  below). 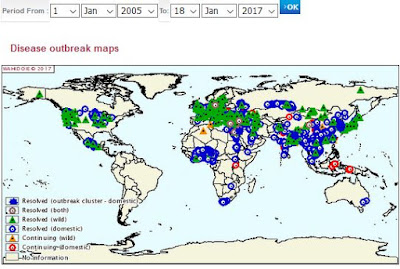 Posted by Michael Coston at 2:19 PM