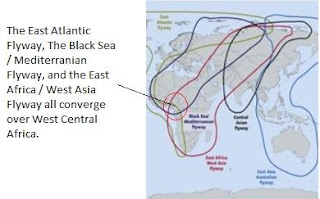 
Although its impact has been relatively small to date, the arrival of HPAI H5N8 to Sub-Saharan Africa this winter raises genuine concerns over the future spread, and continued evolution, of clade 2.3.4.4. HPAI H5 viruses.

`Generation of reassortants always must be expected when different high and low pathogenic influenza viruses are circulating in one population.'

Reports of H5N8 have been more common in northern Africa (Egypt & Tunisia) and the Middle East (Iran, Israel), but given the lack of surveillance, testing, and reporting from much of Africa, it is likely there are other outbreaks we simply haven't heard about.


France's ESA (Epidemiosurveillance Santé Animale) posted the following (translated) update yesterday.  Follow the link for all of the maps, charts, and links.

Homes and cases of HPAI H5N8 in Africa: point situation 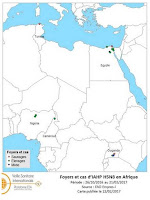 In Egypt, the virus HPAI H5N8 was detected for the first time November 30, 2016 in two coots Coot ( Fulica atra ) found dead in Dumyat (source: OIE). Following this first case, an epidemiological surveillance system was implemented in 45 sites placed on the path of migratory birds, with sampling done on wild and domestic birds. The virus was then detected repeatedly within poultry (mainly ducks (unspecified species)) with ten declared areas from late December to early February (source: FAO Empres-i).

Tunisia is located on the main corridor of migration of wild birds traveling to Africa from Europe (source: OIE). In Tunisia, the first case of H5 HPAI was reported on 1 st December 2016 at 17 coots Coot ( Fulica atra ) and 13 Wigeon ( Anas penelope ) found dead in the north of the country in the Ichkeul National Park ( source: OIE). The Reference Laboratory Padova (Italy) then confirmed that the virus was directly related to HPAI H5 virus clade 2.3.4.4 (this clade including the H5N8 virus). Phylogenetic analysis is ongoing according to the latest OIE report dated February 20, 2017.

In Nigeria, a first outbreak was reported December 17, 2016 (home dating of 19 November 2016) in Kano in outdoor rearing of 250 birds (guinea fowl, turkeys and pigeons) with morbidity and 6% mortality. The owner had bought his birds at a local market. Another outbreak was reported February 8, 2017 (home dating of 11 January 2017) in Kano in a poultry market following the collection of tracheal samples from four live ducks.

In Uganda, two cases of HPAI H5N8 on winged Tern ( Chlidonias leucopterus ) reported January 13, 2017 and, for each notification, 600 cases of 1000 susceptible birds (source: OIE). These statements correspond to high mortalities of wild birds (including wild ducks) on the shores of Lake Victoria. According to the OIE, many wild and domestic birds continue to die of the virus, threatening more than 30 million domestic birds in the country. Another outbreak was reported in a breeding (unspecified species) in Masaka, and a mixed marriage (affecting both wild and domestic birds) in Kalangala with over 4000 domestic and wild birds (species unspecified) found dead (source: OIE / FAO Empres-i).

It is noteworthy that despite the put monitoring systems in place in many countries (whether in Africa or in Europe), the AI ​​case detection in wild birds is difficult, which may lead to under-detection . Furthermore, other HPAI viruses, including viruses HPAI H5, also circulating in Africa. For example, the H5N1 virus was detected in the last month within farms in several African countries such as Burkina Faso, Cameroon, Nigeria, Ivory Coast, Ghana and Niger ( source: Promed).