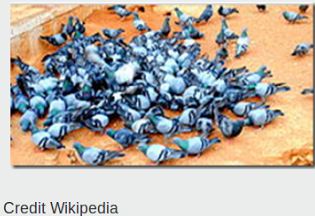 
One of the ongoing controversies in the avian flu world is just how susceptible pigeons are to HPAI viruses like H5N1 and H5N8.  Between being peridomestic birds - which live in close proximity to millions of humans in urban settings  - and their close contact with hobbyists  who raise them, the question is of more than just academic interest.

Early on, and to the relief of many bird fanciers, pigeons gained a reputation for being relatively `immune'  to HPAI H5N1 (see 2006's Magazine article The Invincible, Flu-Immune Pigeon).


Many of the laboratory experiments exonerating pigeons were conducted in the middle of the last decade with older clades of the H5N1 virus. Clades that have been largely supplanted by the continual evolution of HPAI H5 viruses around the globe.

While the source of many avian flu exposures over the years remain unknown, a few with known (or suspected) pigeon connections include:
Although  pigeons appear to have played a minor role in H5N1's spread, in recent years they have been linked to LPAI H7N9 in China (see Eurosurveillance: Genetic Tuning Of Avian H7N9 During Interspecies Transmission & human cases here, here & here).

A 2014 paper by Carol Cardona, Pomeroy Chair in Avian Health, at the University of Minnesota, called Pigeons and influenza viruses, runs concisely through the history of HPAI in pigeons, and ends by saying:

In conclusion, pigeons are probably quite resistant to infection with AIV normally. However, it may be possible for AIV to become adapted to pigeons. The naturally occurring infections that have been documented have been limited in numbers not caused outbreaks. Pigeons have been infected with several H5 sublineage viruses indicating that they are a potential host.


We looked at this topic in much greater detail twice last year in  Genetic Characterization Of HPAI H5N1 In Naturally Infected Pigeons - Egypt and  Study: Genomic Analysis Of HPAI H5N1 Isolated From Pigeons – China.

All of this has become a much bigger issue with the emergence this winter of a much more virulent, and highly persistent, HPAI H5N8 virus in Europe.


In years past, Europe usually only saw a handful of HPAI  poultry outbreaks or detections in wild birds. This year, we are talking a couple of thousand (so far), and uncounted thousands of dead birds.

Suddenly the risk of exposure to pigeons - particularly racing birds - is much higher than in the past.


Wading into the complex and controversial debate, the UK's DEFRA has published a long (25 page) Qualitative risk assessment  on racing pigeons acquiring and spreading avian flu.


First they describe (bolding mine) the current epizootic in Europe:


The current epizootic is spreading rapidly in a wide range of migratory and non-migratory wild waterfowl in Europe (see Annex 2 for the species involved) causing mortalities in these birds. This is strikingly different to previous years and indicates a change in the virus pathogenicity for certain species of bird.

What is unknown at present, and very hard to ascertain, is whether there are species of wild waterfowl which do not show clinical signs of infection, and whether the virus can circulate in non-migratory, wild birds.

However there have been a handful of outbreaks in pigeons (see Annex 2; < 1.5% of poultry outbreaks and < 1% of wild bird findings) and as far as information is available, in all cases there was observable morbidity and / or mortality

Expert opinion is that the virus will retain infectivity in the environment at low temperatures, for up to 55 days at 4oC, in reduced sunlight and with high humidity (Ian Brown, EURL, Pers. Comm.). This means the environment could remain contaminated for several weeks at least.


They then run through the (admittedly) contradictory evidence in far greater detail than in my preface, and after warning they are faced with a `medium level of uncertainty' on several key data points,  they provide their assessment on three key issues:


a) What is the risk of further spread of highly pathogenic avian influenza (HPAI) in GB by domestic pigeon racing?

Medium risk of exposure depending on the area; very low risk of pigeon becoming infected and infectious.

b) What would be the additional risk of introducing highly pathogenic avian influenza (HPAI) to GB by GB-origin pigeons returning (released to fly back) from other EU Member States?

Low to medium risk of exposure depending on the area; low risk of pigeon becoming infected and infectious.

c) what would be the additional risk of introducing highly pathogenic avian influenza (HPAI) to poultry or captive birds through the contact with racing pigeons?

Very low risk of an infectious racing pigeon returning from a race and having direct contact with a poultry farm in GB.


The link to the full report, which is very much worth reading, follows: