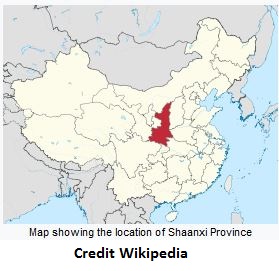 
This 5th H7N9 epidemic (starting in October 2016) has been a season of `firsts', with the virus splitting into two distinct lineages (Pearl River Delta & Yangtze River Delta),  the emergence of an HPAI version of the virus in Guangdong Province, and as we discussed yesterday, the spread of the virus to 5 previously unaffected regions (3 provinces, 2 municipalities) on the Mainland (plus Macao).


Today we can add a sixth region on the Mainland, as overnight Sharon Sanders of FluTrackers picked up a media & government report on the first case from Shaanxi Province.


The patient, a 62 y.o. male, was hospitalized with fever and severe respiratory symptoms in Xianyang City (pop. 5 million)  on April 23rd, but wasn't tested for the H7N9 virus for a week. The patient died on May 1st.


The announcement from the Shaanxi government website details their emergency response, which includes the closing of urban and suburban live markets, the screening of influenza-like cases, and additional training for medical personnel.


The official statement from the Shaanxi Health and Family Planning Commission follows.

April 30, the Second Affiliated Hospital of the National People's Congress sent to Xi'an, Shaanxi Province CDC detection, the results show H7N9 virus nucleic acid positive. May 1 12:00 patients died due to multiple organ failure, May 3 8:00, then the National Center for Disease Control and Prevention laboratory review report to confirm that the death of biological specimens for the H7N9 virus nucleic acid positive, the case Diagnosed as the province's first case of H7N9.

At 7:00 on May 1, when the provincial Health and Health Committee received the report, immediately start the emergency response mechanism of sudden infectious diseases epidemic, respectively, held in Xi'an, Xianyang City, health care system and provincial H7N9 epidemic prevention joint defense joint control department meeting, research Deployment of patient treatment and epidemic prevention and control work. The provincial government attaches great importance to the deputy governor Wei Zengjun made important instructions, requiring the provincial health planning commission and the relevant city attaches great importance to go all out to do the epidemic prevention and control work to prevent the spread of the epidemic spread.

Xi'an, Xianyang municipal government immediately held a special meeting arrangements for the deployment of prevention and control work, decided to close the urban and suburban all live poultry market; all the size of the farm households to conduct investigation and thorough disinfection.

Provincial Health and Health Committee to be held in the afternoon of May 3 held provincial, city, county, township four prevention and control work conference, May 4 again organized above the county medical staff to carry out influenza-like cases screening and medical treatment special training, Epidemic response and new patient treatment of the preparatory work.

Up to now, Xi'an, Xianyang two cities and patients have had close contact with the staff have all the investigation flow finished, all medical observation of the staff were not clinical abnormalities