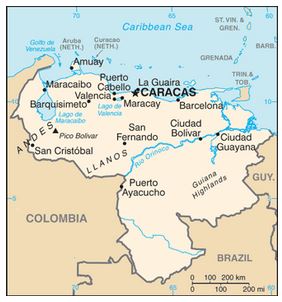 According to a report by Outbreak News Today two weeks ago (see Venezuela reports 86 diphtheria cases in 1st four months of 2017), the once nearly vanquished scourge of  Diphtheria is on the rise in the once prosperous - but now virtually collapsed - country of Venezuela.


Since the Venezuelan Health Authorities only intermittently release information, we are heavily dependent upon social media, and Spanish language news media, for clues as to what is going on there.

Over the past couple of days, the twitter hashtag #Difteria has accompanied multiple (unconfirmed) reports of an outbreak at the University Hospital in Maracaibo.  There are additional reports from Valera, in Trujillo State, of two deaths as well.

While twitter traffic isn't always the most reliable source of information, we've the following (translated) report published today in Diario La Verdad, that would appear to largely corroborate the information coming over social media.

Thirteen cases of diphtheria in the HUM

Five confirmed cases and more than eight to corroborate remain in the facilities of the health center. One of the infected is the administrative staff of the HUM. The staff that works in the institution is only protected with masks in the middle of the contingency

The HUM was created a situation room and contingency plans are being created Photo: Archive

The alarms were still on and after the end of the weekend they were activated. Fear and anxiety took over Monday workers, administrative staff, doctors and patients, as well as family members who attended the Hospital Universitario de Maracaibo, after a wave of comments that indicated that within the spaces of the center An epidemic of diphtheria spreads, taking force, after confirmation by the authorities of a case 10 days ago.

An administrative source working in the institution and who preferred not to reveal his name for fear of reprisals, he pointed out that the situation "overrun" the limit and everything remains "low profile". "Infections increased this weekend, we managed at least 13 cases but the rates tended to increase."

Of the infections reported by the staff working in the University, there is an infant between two and three years, an orderly and the secretary of the Support Division head, located on the sixth floor. The patients arrive with the symptoms to the emergency, then they are transferred to Triaje, they make an interconsulta and then they are sent to the department of ENT (Otolaryngology), however, this one remains closed to decontaminate it.


Although the diphtheria vaccine is highly protective against the disease, vaccinated individuals can still can be asymptomatic carriers of toxigenic C. diphtheriae. So it doesn't take very long into the collapse of a nation's public health system before unvaccinated children start coming down with this highly contagious disease.


Diphtheria antitoxin (DAT) has been in short supply for several years, even in the EU (see ECDC RRA A case of diphtheria in Spain), and is likely either in short supply, or completely unavailable, in Venezuela.

A grim reminder of just how thin the veneer of modern civilization really is, and how easily an economic collapse, or some other major calamity (war, natural disaster, pandemic, etc.) can erode and disrupt those things we currently take for granted.

The most recent UNICEF report on DAT availability, describes the current global incidence of diptheria as:


DAT supply availability from manufacturers has been limited for many years. UNICEF does not anticipate any change to this situation, and expects continued shortage through 2017.


All of which makes prevention, not treatment, the preferred option.