Once a month, usually between the 10th and the 15th, China's  NHFPC (National Health & Family Planning Commission) releases a bare-bones listing of the previous month's reportable infectious diseases across Mainland China.


These summaries are very short - with an attached list of over 3 dozen infectious diseases - providing only country totals, and number of deaths recorded.

With their 5th H7N9  flu season beginning in October, today's is the 9th report of this 5th Epidemic season, which are summarized below.

Last month's cases (n=35) are nearly 4 times greater than in any month of June since the H7N9 virus emerged in 2013. For the 7th month in a row, China reports no other (H5) human infections.

The (translated) text and a modified chart (highlight mine) from today's NHFPC report follows: 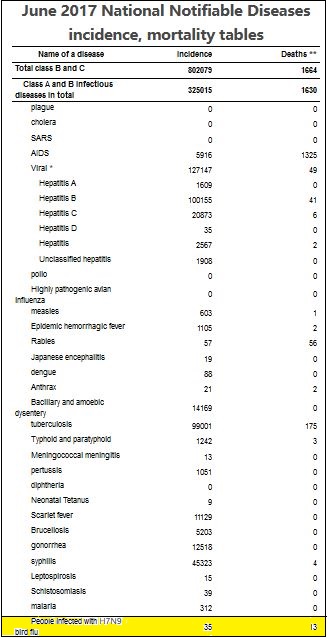 Posted by Michael Coston at 8:13 AM