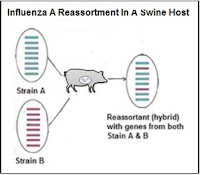 
At the end of 2015 Chinese and Japanese researchers made headlines when they isolated and characterized a number avian H1N1 virus variants circulating in Chinese pigs that they believed had considerable pandemic potential (see PNAS: The Pandemic Potential Of Eurasian Avian-like H1N1 (EAH1N1) Swine Influenza)

In the `Significance' section of their report the authors boiled it down to this:


Here, we found that, after long-term evolution in pigs, the EAH1N1 SIVs have obtained the traits to cause a human influenza pandemic.


Xinhua News ran an English Language report on all of this, with interviews with the lead author, which you can read at the following link:


Admittedly, this somber assessment came at a time when China's H7N9 virus appeared on the decline, and after HPAI H5 had gone mysteriously silent across Europe and North America following the summer of 2015.


There is also a school of thought that suggests while avian flu viruses might have a greater public health impact, swine-origin viruses - because they share the same HA subtype (H1, H2, or H3) as all of the pandemics of the past 130 years - are more likely to jump to humans (see Are Influenza Pandemic Viruses Members Of An Exclusive Club?)


In June of 2016, in Sci Rpts: Transmission & Pathogenicity Of Novel Swine Flu Reassortant Viruses we looked at another study - again out of China - where researchers experimentally infected pigs with one of these Eurasian-Avian H1N1 swine influenza viruses and the 2009 H1N1pdm virus.

In doing so, they generated yielded 55 novel reassortant viruses spread across 17 genotypes, demonstrating not only how readily EAH1N1 SIV can reassort with human H1N1pdm in a swine host, but also finding:


`Most of reassortant viruses were more pathogenic and contagious than the parental EA viruses in mice and guinea pigs'.

The authors went on to say in their closing remarks:


In summary, our data highlight the potential public health danger of novel viruses arising from reassortment in pigs between circulating EA swine H1N1 and pdm/09 H1N1 viruses. Such reassortants for which there is little apparent cross protection from current vaccines could be much more pathogenic and transmissible than parental viruses.

While human infection with EAH1N1 in China is only rarely reported, last September, in EID Journal: Reassortant EAH1N1 Virus Infection In A Child - Hunan China, 2016, we looked at a report of a boy with severe pneumonia who was infected with a reassortment of  - you guessed it - EAH1N1 and the 2009 H1N1pdm virus.


The virus contained 2 surface genes from an EA-H1N1 virus and 4 internal genes from A(H1N1)pdm09 virus.

Compared with JS/1/11 EA-H1N1 virus, the reassortant virus exhibited higher infectivity, virulence, and replication in C57BL/6J mice, demonstrating the need for further evaluation of HuN EA-H1N1 virus to assess the threat it poses to public health. Our results indicate the need for heightened surveillance.

All of which brings us to a new open access study, appearing this week in the Journal of Virology, that finds - among other things - that a single amino acid (AA) change in the HA of the EAH1N1 virus significantly alters its tranmissibility in the guinea pig model.

A number of researchers in today's study - including the lead author Hualan Chen - were part of the 2015 PNAS EAH1N1 study research team.

We used reverse genetics to generate a series of reassortants and mutants in the GX/18 background and tested their transmissibility in guinea pigs.

We found that a single amino acid substitution of glycine (G) for glutamic acid (E) at position 225 (E225G) in the HA1 protein completely abolished the respiratory droplet transmission of GX/18, whereas the substitution of E for G at the same position (G225E) in HA1 enabled HLJ/27 to transmit in guinea pigs.

We investigated the underlying mechanism and found that viruses bearing 225E in HA1 replicated more rapidly than viruses bearing 225G due to differences in assembly and budding efficiency. Our study indicates that the amino acid 225E in HA1 plays a key role in EAH1N1 swine influenza virus transmission and provides important information for evaluating the pandemic potential of field influenza strains.

In this study, we explored the genetic basis of the transmissibility difference between two Eurasian avian-like H1N1 (EAH1N1) swine influenza viruses in guinea pigs, and found that the amino acid glutamic acid at position 225 in the HA1 protein plays a critical role in the transmission of EAH1N1 virus by increasing the efficiency of viral assembly and budding.

As we've discussed previously (see Differences In Virulence Between Closely Related H5N1 Strains), it sometimes only requires a small change to an influenza virus to change its behavior in a major way.
Other changes - often in combinations of AA sites - can affect receptor cell binding, replication rates, and adapatation to lower temperatures found in the human airway.  All important traits for any flu virus with pandemic aspirations.


While much has been learned about these changes in the past decade, the impact of many of these amino acid substitutions remains a mystery.

Learning about these combinations can hopefully tell us when viruses in the wild are getting closer to becoming a pandemic strain.  After outlining all of the results of their testing, the authors of today's study reiterated their previous assessment.

In the present study, we explored the genetic basis for the difference in transmissibility in guinea pigs of two EAH1N1 swine influenza viruses, GX/18 and HLJ/27, and found that the single amino acid mutation E225G in HA1 abolishes the transmissibility of GX/18, and that the mutation G225E in HA makes HLJ/27 highly transmissible in guinea pigs. We further investigated the underlying mechanism and demonstrated that viruses bearing 225E in their HA1 replicate more rapidly than viruses bearing 225G in HA1 due to differences in their assembly and budding efficiency.

We checked the HA sequence of the H1N1 SIVs and found that 225G was present in the HA1 gene of the majority of strains detected before the year 2000; however, the number of classical H1N1 SIVs that contain 225D in HA1 gradually increased after 2000 and became predominated after 2009  (Fig. 10A), and the EAH1N1 SIVs that contain 225E in HA1 showed a similar tendency (Fig.256 10B).

These findings suggest that the pandemic potential of the EAH1N1 SIVs is increasing.


While EAH1N1 is the prime swine-origin virus of concern in China, it isn't alone (see Front. Microbiol.: A Novel H1N2 Reassorted Influenza Virus In Chinese Pigs), and similar swine flu evolution continues in North America, Europe, Brazil, and undoubtedly many other places where there is (unfortunately) little or no surviellance.

Some recent blogs include:

Posted by Michael Coston at 8:56 AM