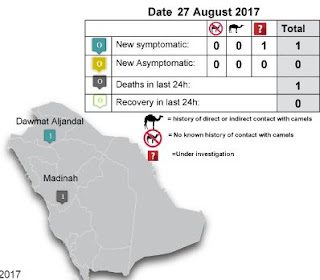 With literally a couple of million religious pilgrims flooding into Saudi Arabia for this week's Hajj, any uptick in MERS activity - even away from the Holy Cities of Meccah and Medinah - is of concern.

Unfortunately, reporting from the MOH over the past 10 days has become erratic again, with delayed postings, skipped days, and incorrectly labeled links (see master list below). 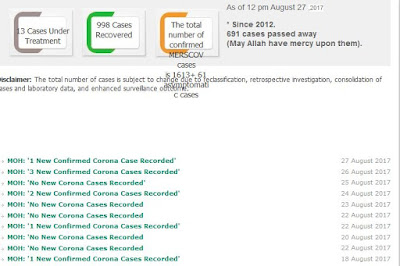 Since Thursday, 6 new cases have been announced, five of which come from Domat Al Jandal (aka Dawmat AlJandal) region, which between August 2nd and 11th reported 13 cases linked to a hospital/family cluster (see WHO Aug 17th Update).


The initial case reported August 2nd (M,51) was listed as having an unknown primary exposure.


After a break of nearly 2 weeks, on the 24th a primary case (F, 40) was reported (again, no known exposure) again from Domat Al Jandal , followed yesterday by 3 household contacts (2 girls ages 10 & 14, and 1 male age 50).  The two young girls are listed asymptomatic.

Today KSA is reporting yet another primary case from Domat Al Jandal (F, 33), again with no listed exposure.

While the source of many MERS infections are self evident (camel contact, household contact, hospital acquired), for many we simply don't know how an individual was exposed.  The possibility has been raised of mild or asymptomatic transmission in the community, but that remains largely unproven.


Exactly why Domat Al Jandal has seen so many community acquired cases this month remains a mystery, although hopefully someone is doing the necessary epidemiological investigations to explain it.

Meanwhile, the Hajj is set to begin on Wednesday, August 30th and run through next Monday.