J. Virulence Editorial: HPAI H5N8 - Should We Be Worried? 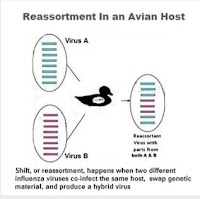 The pattern with emerging and re-emerging infectious diseases is that they aren't perceived as being a human health threat until something changes, and then they suddenly are.


That `something' could be a change in the genetic makeup of the pathogen, an environmental change, or a change in the pattern of human activities that put us more at risk.

Until 2005 Chikungunya was an obscure mosquito-borne virus that had only caused small outbreaks in east central Africa, but a mutation in the envelope protein gene (E1-A226V) of the virus allowed the Aedes albopictus or `Asian tiger’ mosquito to transmit the virus more efficiently (see A Single Mutation in Chikungunya Virus Affects Vector Specificity and Epidemic Potential).

Suddenly CHKV was sweeping across the Indian Ocean, into the Pacific, has now become endemic in South America and the Caribbean and occasionally turns up in Europe. A few years later Zika, armed with a few new mutations, followed a similar path.

H7 avian viruses - until 2013 - were considered far less dangerous than HPAI H5N1. That changed when a reassortment of three viruses (H7N?, H?N9, and H9N2) in China produced a low path (in birds) H7N9 virus that (quite unusually) has high morbidity and mortality in humans.
H7N9 has since split off into two distinct lineages (Pearl River Delta  & Yangtze River Delta ) and has recently spun off an HPAI version.  The CDC's IRAT system ranks the newly emerged Yangtze River Delta lineage along with the original Pearl River Delta Lineage (see Updating the CDC's IRAT (Influenza Risk Assessment Tool) Rankings) at the top of their list of viruses with the greatest pandemic potential.


Frankly, we could list examples all day long.  The point is, nothing is static in the world of viruses and bacteria.  Change is inevitable.

The saving grace after HPAI H5N8 emerged in South Korea in 2014 - and subsequently spread to North America, Europe, and across much of Asia, and into the Middle East and Africa -  has been the lack of human infections and illness.  Although related to H5 viruses (H5N1 & H5N6) that can infect, and even kill humans, H5N8 has remained a threat only to poultry and other bird species.

While an enormous stroke of good luck, this lack of infectivity among humans may not last forever.  Clade 2.3.4.4 H5 viruses have proven themselves to a promiscuous lot, reassorting at the drop of a gene segment, generating not only new genotypes, but new subtypes as well (see DEFRA: Update #12 On HPAI H5Nx In UK/Europe).

Over the past 10 months we've seen a number of studies that have looked at the potential for H5N8 or its spinoffs to evolve into a human health threat.  A few include:

Perhaps most telling of these came last month in J. Virulence : Altered Virulence Of (HPAI) H5N8 Reassortant Viruses In Mammalian Models, which found:


Taken together, our study demonstrates that a single gene substitution from other avian influenza viruses can alter the pathogenicity of recent H5N8 viruses, and therefore emphasizes the need for intensive monitoring of reassortment events among co-circulating avian and mammalian viruses.

None of this means that HPAI H5N8 will evolve into a humanized pathogen, only that it could.  And with the expected return of avian flu this fall and winter to Europe, Asia, and potentially North America - no one should take its previously benign nature for granted.

We've an editorial in the Journal Virulence this week that reviews and summarizes the literature, and finds enough reasons to be concerned over the future evolutionary path of H5N8, stating that:


The extensive distribution of HPAI H5N8, as well as the gene reassortment with other circulating avian viruses already observed for H5N8 suggests there is a potential risk for human cases of H5N8 infections.

You'll find the full editorial at the link below, which is well worth reading in its entirety.

Highly pathogenic avian H5N8 influenza viruses: Should we be concerned?