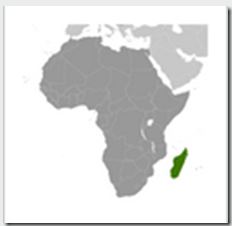 
We've the first update from Madagascar's Ministry of Health since the 14th, posted on the BRGNC Madagascar website. The number of cases continues to increase, adding 195 cases and 11 deaths since Saturday's report.

I've only translated and posted portions of today's update, so follow the link to read it in its entirety.

GENERAL SITUATION OF PLAGUE IN MADAGASCAR

The plague epidemic is currently affecting 38 districts, 17 Regions of Madagascar.

Generally, 805 cases of plague were notified, 595 of which were pulmonary and 210 bubonic forms.

The report shows 74 deaths, with a national case fatality rate of 9.2% (the number of deaths with the total number of reported cases).

Among these notified cases:

The following figure shows the distribution of the plague situation (by District) recorded until now. 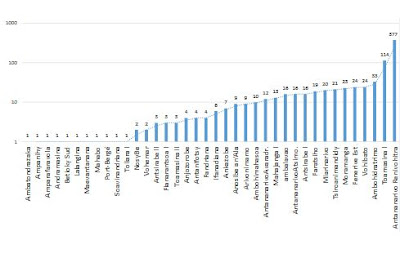 - To reduce the risk of the spread of the plague epidemic, 13 out of 38 Affected districts have started to implement the sanitary control at the and at the exit of the city. It should be noted that the road axis is part of a favorable to the transmission of plague of pulmonary forms. The BNGRC, through appeals with the local authorities of the Districts affected, reinforces its recommendation to make this system more operational. A supply in personal protective equipment (PPE) is very necessary for a better implementation of this device.

- The Ministry of Tourism continues, today, the sensitization of the hotels in the Region of Analamanga and also supports the cities of Ambatondrazaka and Moramanga in terms of sanitation activity.

- The Ministry of Public Health and the WHO are preparing the equipment and specialized equipment at the level of 38 Districts for the benefit of managers and health personnel at the local level.

- supports the DVSSE (Directorate of Health Surveillance and Monitoring Epidemiology) in the management of epidemic and follow-up data of contacts. A total of 2,838 contacts out of 93 cases of pulmonary recorded in the Regions of Analamanga, Atsinanana and Upper Matsiatra.

- has just concluded a partnership agreement with the Malagasy Red Crossfor the implementation of activities related to dignified burials andin regions affected by the epidemic.

- 4 Plague Treatment Centers (CTP) are already operational, of which 3 inthe city of Antananarivo and 1 in Toamasina. These TCOs are supported by WHO,UNICEF, Médecins du Monde, ACF and Médecins sans frontières of Belgium.

Posted by Michael Coston at 7:43 PM