On Monday, in Japan: Testing Dead Mute Swan For AI In Shimane Prefecture, we learned of Japan's first suspected bird flu detection of the fall. Today we learn that a second dead bird has been recovered from Shinji Lake - and has also tested positive for Influenza A - and that the lab tests confirm the first bird died from HPAI H5N6.


HPAI H5N6 was first reported in Japan (In Hokkaido & Akita Prefectures) not quite 1 year ago (on Nov 15th, 2016), arriving via migratory birds, and eventually spreading to roughly a dozen poultry farms. 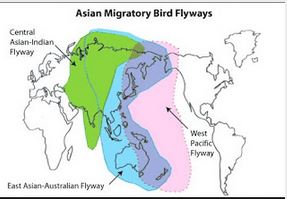 Within a couple of months hundreds of infected wild bird and environmental detections had been reported across nearly all of Japan by their Ministry of Environment.

First this (translated) announcement of the test results from MAFF, Japan's Ministry of Agriculture, Forestry and Fisheries.


2017 November 9,
the Ministry of Agriculture, Forestry and Fisheries

Today, the Ministry of the Environment, highly pathogenic avian influenza virus from Matsue, Shimane Prefecture of death wild birds (Mute Swan) (H5N6 subtype) There was announcement to the effect that has been detected. When it is put to the livestock officials, intrusion prevention measures of the disease virus, early detection and notification, etc. of the abnormality of feeding poultry, again, we ask that you will ensure the epidemic prevention measures.

1. Today, the Ministry of the Environment, in Matsue, Shimane Prefecture, highly pathogenic avian influenza virus from the recovered Mute Swan 1 birds of dead individuals (H5N6 subtype) There was announcement to the effect that has been detected on November 5 . (Annex 2)

We ask to livestock officials, including the poultry breeding farms, intrusion prevention measures of the disease virus, early detection and notification, etc. of the abnormality of feeding poultry, again, we ask that you will ensure the quarantine measures .

(This matter, to the State, has issued a notification to re-enforce quarantine measures of the disease.) (Appendix 1)

3. It should be noted that in our country, so far poultry meat and poultry eggs by eating, cases of avian influenza virus was transmitted to humans has not been reported.

4. In the future, be carried out interviews in the field when the disease has been confirmed in poultry breeding farms, that there is a risk that cause the spread of the disease, since it could violate the privacy of those farmers , thank you for your cooperation as strictly avoided.

for re-thorough quarantine measures with from death wild birds in Appendix 1 Shimane Prefecture to the high cases pathogenic avian influenza virus has been detected (PDF: 89KB)

A second carcass was recovered yesterday, and tested positive for influenza A in the field, at Shinji Lake in Shamane Prefecture.  This from the the Sanin Central Daily News.

Shimane Prefecture is 8 days, the result of a simple test of the Lake Shinji tufted 1 males who had died in the north bank of the Matsue launch the town, announced that came out positive reaction of the type A avian influenza. To be in this fall 5 days and out positive reaction from male mute swan in the south coast for the first time the city Shinji the town in the whole country, such as the Ministry of the Environment and Shimane Prefecture is directed to preventing the spread of infection, they are increasingly wary.


While less traveled than its H5N8 and H5N1 cousins, H5N6 made its big breakout from China last fall, and over the past 12 months has visited Japan, South Korea, Taiwan and the Philippines.  Unlike H5N8, H5N6 has a limited history of infecting - and killing - humans.


H5N6 also continues to evolve, and reassort, at an impressive rate (see Virology: Five Distinct Reassortants of HPAI H5N6 In Japan - Winter 2016–2017), and there are genuine concerns that it may eventually spread globally via migratory birds as have H5N8 and H5N1.

Today's announcement will no doubt heighten the alert level - not only in Japan - but all up and down the Asian Migratory flyway.