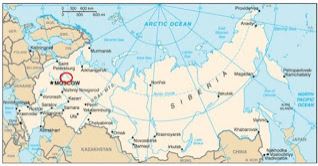 
Three days ago in Russia: Follow Up & OIE Notification Of H5N8 Outbreak In Kostroma we saw what was initially reported to be an outbreak of H5N8 at a large poultry producer in Kostroma Region, about 200 miles north and east of Moscow.


Today, that OIE notification record is now empty, and a fresh notification has been posted indicating this outbreak is due to a `New strain of a listed disease in the country'; an HPAI H5N2 virus instead.

This brings up some interesting possibilities. But first, a look at today's notification. 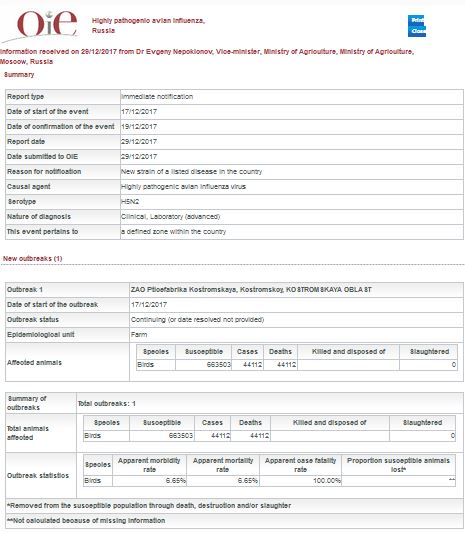 The details, other than the subtype and the report date, are virtually identical to the initial report. The same location, and the same number of birds affected.  As this is listed as a `New Strain' in Russia, there are several plausible explanations for its origins, including:

This could be a case where an LPAI H5N2 virus was carried  in by local birds, and it mutated into an HPAI virus after contaminating the poultry farm.

LPAI viruses are commonly found in wild and migratory birds, and generally only produce mild symptoms in poultry. The concern is -  when LPAI H5 and H7 viruses are not quickly controlled in poultry flocks -  they have the potential to mutate into highly pathogenic strains.


Hence all H5 & H7 outbreaks are reportable to the OIE, and must be quickly eradicated.

Over the past couple of years we've seen an unusual number of spontaneous LPAI-to-HPAI mutations, both in Europe (see here, here, and here) and last year in the H7N8 outbreaks in Indiana and again this year with the H7N9 outbreaks in Tennessee.


Another strong possibility is that HPAI H5N8 has (once again) reassorted with a local LPAI virus, and has produced another spinoff.

Clade 2.3.4.4. H5N8 has proven itself quite capable of reinventing itself, as we've seen with H5N2 and H5N1 in North America, H5N5 and H5N6 in Europe, and H5N2 and H5N3 in Taiwan. These events were so common during last winter's epizootic in Europe, it led Germany's Friedrich-Loeffler-Institut (FLI) to repeatedly warn that:


`Generation of reassortants always must be expected when different high and low pathogenic influenza viruses are circulating in one population.'

We'll have to wait for further genetic analysis to learn the origins of this HPAI H5N2 virus.  Perhaps it came from one of the two scenarios mentioned above, or perhaps we'll find it came from another less-likely source.


What we can say with certainty is that the roster of HPAI viruses around the world continues to grow.

The plot, as they say, thickens.  Stay tuned.