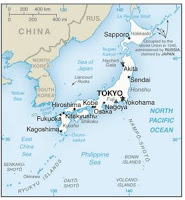 
Compared to last winter, Japan has had a relatively easy time with bird flu this year - with only a dozen environmental and wild bird detections and 1 poultry outbreak reported since November - all of which have stemmed from the recently arrived reassorted H5N6 virus of European origin (see Tottori University: Shimane HPAI H5N6 A New Reassortment).


All of this year's reports have come from the far south of the country. At least, until today.

Japan's Ministry of Environment is reporting the discovery of a dead Goshawk in a Tokyo park, and has raised the surveillance level to 3 for the country.  Three reports, the first a translation of a PDF from the MOE.

Based on the occurrence of poultry in Sanuki City, Kagawa Prefecture on  January 12, The technical manual for high-pathogenic avian influenza in birds The nationwide response level in the current bird surveillance Level 3.

In case of reinforcement or abnormality of monitoring system, I have recently asked for a thorough period, but based on the current situation, Thank you for the bottom.

In the case of a change in the situation related to avian influenza in your prefecture , please inform us promptly.
In charge of Wildlife conservation Management Office Nishiyama, Iwano, Suzuki
Phone 03 (5521) always


Reuters' Japan has the story as well, with this translation:

The Ministry of the Environment 17 days, announced that from Goshawk one bird carcasses found in the park of the Ota-ku, Tokyo, detected the highly pathogenic avian influenza virus of the highly virulent (H5N6 type). In response to this, Tokyo zoo Association the same day, at the Metropolitan 4 facilities, including Ueno Zoo (Taito), decided the immediate exhibition discontinuation of rare species and susceptible to infection by some birds from 18 days.

According to the city, including the giant panda at Ueno Zoo, animals other than birds continue the exhibition.

Given that it has been detected in Japan plurality of positions, the Ministry of Environment raised the three stages is alert level from "Level 2" to which the "Level 3". In the future, newly when the wild bird carcasses were found, to finely perform the virus inspection.


And this from the Yomiuri Online.

Bird flu confirmed in Tokyo, the exhibition discontinuation of birds at the zoo

Tokyo Metropolitan Government and the Ministry of the Environment has 17 days, was released from the carcasses of Goshawk of wild birds found in Ota Ward in this month five days, a highly toxic highly pathogenic avian influenza virus has been confirmed.

Detection second case since last February in Tokyo. In order to prevent the spread of infection, the city will cease from 18 days the exhibition of some birds that are kept in Metropolitan zoo and water aromatic garden, such as Ueno Zoo.


Meanwhile the MOE is also reporting a positive field test on a Great Crested Grebe from Shimane Prefecture.

Posted by Michael Coston at 9:38 AM