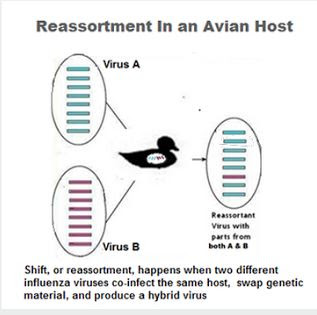 
Five years ago avian H7N9 - at least as being a threat to human health - wasn't on our radar screen.  Neither were H5N8, H5N6, H10N8, or H6N1. Yet all five of those viruses have evolved, emerged - and to varying degrees - have infected humans in recent years.


H7N9 came to light at the end of March 2013, sparking 130+ infections in its first spring outbreak in China. Despite being an LPAI virus in poultry, it was the first consistently severe H7 influenza ever reported in humans.

Like most newly emerging flu viruses, it was formed though reassortment.  The swapping of genetic segments from two or more existing influenza viruses in a shared host (in this case H7N?, H?N9, H9N2).


Reassortments like this occur frequently, particularly in birds - and while many end up being evolutionary failures - every once in awhile a highly successful new virus is created.


Even after a new hybrid virus emerges, it continues to evolve, and so we often see dozens of genotypes within a single subtype.  With this diversity often comes marked differences in behavior, and robustness.

While we primarily watch for avian H5 and H7 viruses - since they have shown the greatest ability to mutate into HPAI strains - they aren't the only avian subtypes that have jumped to humans.
LPAI H6N1 viruses have been around for decades in Chinese poultry and possesses similar internal genes to H5N1 and H9N2 (cite 2002 J Virol  Molecular evolution of H6 influenza viruses from poultry in Southeastern China by Webster, Webby, Shortridge  et al.). It has been speculated that it may even have been involved in the genesis of H5N1 in Hong Kong in 1997.
While H6 viruses aren't exactly at the top of the list of avian viruses that we watch, they aren't necessarily benign.  All of which lays the foundation for a new report, that describes the emergence of a novel reassorted H6N2 virus in India.

Here, we report isolation, and antigenic and genetic characterization of two H6N2 viruses isolated from apparently healthy domestic ducks in Kerala and Assam, India during 2014 and 2015, respectively.

Hemagglutination inhibition assay revealed antigenic divergence between the two isolates. This result was corroborated by amino acid differences at 55 positions (15.98%) between their hemagglutinin (HA) 1. The sequence analysis of the viruses indicated avian receptor specificity, avian origin, low pathogenicity to poultry and sensitivity to oseltamivir.

However, Kerala14 had V27I mutation marker for amantadine resistance in M2. The Assam15 virus had an additional N-linked glycosylation on HA2 (position 557) compared to Kerala14 virus. Analysis of the HA gene revealed that both the viruses belonged to distinct lineages (Eurasian and Asia I).

Analysis of neuraminidase (NA) and internal gene segments revealed distinct gene constellation indicating that both the viruses are novel reassortants and are genetically distinct. The results suggest independent introductions of the two H6N2 viruses into India and migratory wild birds in the Central Asian flyway might be the source of H6N2 viruses in ducks in India.

Therefore, continued AIV surveillance in poultry and wild birds is essential for detection of emergence of novel strains, which may have pandemic potential and control of their spread.

While all of this may end up being nothing more than interesting footnote in the evolution of avian influenza viruses, it is a reminder that Nature's laboratory is open 24/7, and it never stops tinkering with the evolutionary process.

The trend over the past decade has been seeing an increasing number of novel virus threats emerge, with the CDC's  IRAT (Influenza Risk Assessment Tool) currently following 14 novel flu subtypes/strains that circulate in non-human hosts and are believed to possess some degree of pandemic potential.


That's an increase of 3 new viruses (Canine H3N2, a second lineage of H7N9, and North American H7N8) over the past 2 years.

Given H6's ubiquity in Chinese poultry, it's apparent (albeit, currently limited) ability to infect humans, and its uncertain and diverse evolutionary path going forward, H6Nx can't be ruled out as a future threat.