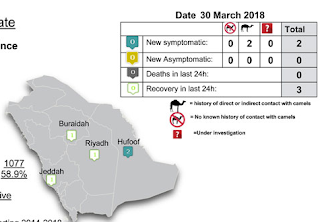 
After a couple of days without an update the Saudi MOH posted two new MERS cases for March 30th, both from Hufoof  and both listed as primary with recent direct contact with camels.

Both are in stable condition, although quite unusually, one of the cases is a 5 year old child.  Three recent recoveries are also listed.

As the WHO EMRO Chart below illustrates, MERS infection in children - for reasons we don't really understand - is exceedingly low. The few that have been documented have almost always been secondary infections (household and/or hospital). 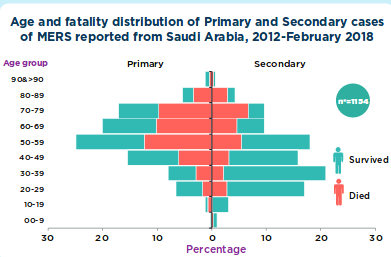 While not MERS related, another emerging infectious disease story has surfaced (again) in Saudi Arabia.


Yesterday, the English language Saudi Gazette carried a long article which calls for hospitals to be alert, and to report immediately, any cases of Alkhurma Hemorrhagic Fever (AHFV or AHF).

As far as I can tell, this alert is precautionary, as I've not seen any reports of recent cases. A tick borne illness, AHF is most common in the spring and early summer, and so this is the time of year hospitals should be alert for cases.

First some excerpts from the Saudi Gazette report, then I'll return with more on AHF.

Hospitals put on alert after fears of new Alkhurma fever outbreak
JEDDAH – Government hospitals in Jeddah have been alerted following the fresh outbreak of Alkhurma hemorrhagic fever (AHF), which is named after a township located close to Makkah, where the first cases of Alkhurma fever were reported about 20 years ago.

During the past years more than 40 Alkhurma cases have been reported in the Kingdom. The fever hits mainly shepherds and cattle owners as well as butchers, cleaners and housewives. Pilgrims who slaughter sacrificial animals may also contract the disease.

The Health Affairs in Jeddah has asked hospitals to inform it about new cases of the disease as quickly as possible, Al-Hayat Arabic newspaper reported.


The CDC maintains an AHF webpage, which describes this disease, including transmission, signs and symptoms, and laboratory diagnosis.

Subsequent cases of AHF have been documented in tourists in Egypt, extending the geographic range of the virus and suggesting that geographic distribution of the virus is wide and that infections due to AHFV are underreported.

The persistence of the virus within tick populations, and the role of livestock in the disease transmission process, are not well understood. The AHFV virus is a variant of Kyasanur Forest Disease (KFD), a tick-borne Flavivirus found in Karnataka State and environs in India.

Since the first description of AHFV, several hundred cases of AHF have been reported. Cases appear to peak in spring and summer. Further study of AHFV is needed to improve public health measures.

The May 2018 EID Journal carries a Dispatch on the potential geographic spread of AHF via ticks hitching a ride on migratory birds (more on that later).

Alkhurma hemorrhagic fever virus RNA was detected in immature Hyalomma rufipes ticks infesting northward migratory birds caught in the North Mediterranean Basin. This finding suggests a role for birds in the ecology of the Alkhurma hemorrhagic fever virus and a potential mechanism for dissemination to novel regions. Increased surveillance is warranted.

We detected AHFV/KFDV RNA in 6 of 1,771 investigated ticks. Although we could not differentiate between KFDV and AHFV on the basis of the short sequences analyzed, we suggest these sequences represent AHFV because this supposition is geographically and ecologically more plausible. Our findings are insufficient to establish the role of the H. rufipes tick as an AHFV vector. However, detection of AHFV RNA in Europe and Asia Minor raises concerns for conceivable dissemination of the virus to these areas, facilitated by climate change resulting in increased distribution of Hyalomma spp. ticks.

To our knowledge, birds have not been shown to play a role in the ecology or epidemiology of AHFV, and this tick species has not been identified previously as a possible vector. Our finding of this virus in ticks infesting birds en route from Africa to Europe and Asia, together with clinical cases in southern Egypt, the detection of AHFV RNA in ticks, and cases of seropositivity in Djibouti, could indicate a wider geographic distribution of the virus throughout Eastern Africa and in novel regions. Further investigations of AHFV ecology and modes of transmission, including the potential role of Hyalomma ticks as vectors and passerine birds as reservoirs or distributors of potentially infected ticks, as well as increased surveillance, are needed.

Ms. Hoffman is a doctoral student at the Zoonosis Science Center, Department of Medical Science, Uppsala University, Uppsala, Sweden. She has a background in infection biology and a special research interest in vectorborne infections, particularly the potential role of migratory birds in the transmission of tickborne pathogens.


If all of this sounds vaguely familiar, you may remember in 2016 we looked at a couple of studies , one of which found ticks carrying Crimean-Congo Hemorrhagic Fever being carried by migratory birds.

Alarm bells first rang in 2010 when researchers detected the presence of CCHV in ticks collected from deer in and around Cáceres, in the western part of Spain.   This discovery was reported in the CDC's EID Journal in 2012.

We report the detection of CCHFV in ticks collected in southwestern Europe. A total of 117 semi-engorged adult H. lusitanicum ticks were collected from 28 adult red deer (Cervus elaphus) in November 2010, at a site (39.63°N, 7.33°W) in Cáceres, Spain.

Migratory movements of birds could explain the presence of the virus in southwestern Europe because birds are common hosts of immature H. marginatum, which was reportedly introduced into Europe through annual migratory flights along the western coast of Africa (10). Because of the lack of genetic similarities among virus strains, trade movements of domestic or wild ungulates from eastern Europe do not support our finding.


The following year - also in the EID Journal - in Crimean-Congo Hemorrhagic Fever Virus in Ticks from Migratory Birds, Morocco,  we saw further evidence supporting the notion that CCHF could be spread by ticks carried by migratory birds.

Crimean-Congo hemorrhagic fever virus was detected in ticks removed from migratory birds in Morocco. This finding demonstrates the circulation of this virus in northwestern Africa and supports the hypothesis that the virus can be introduced into Europe by infted ticks transported from Africa by migratory birds.


A reminder that the disease risk profile where you live is always subject to change, and that once exotic diseases can move in (as we've seen with WNV in the United States over the past 20 years), and quickly become endemic.

Posted by Michael Coston at 8:07 AM