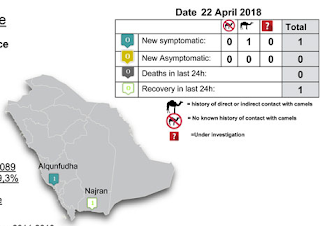 For the past 3 months daily reporting of MERS cases from the Saudi MOH has become increasingly erratic, with batches of days posted - often every 5 to 7 days - frequently omitting days entirely.

While it is likely many of these dates had no MERS activity, on many days where reports are posted, they likewise report no activity.  So the reasons behind these gaps are unknown.

This mornings batch update covers 7 days, but only provides 3 daily reports. Only one - the 22nd - shows activity; a new case in Al Qunfudhah, and a recovery in Najran. 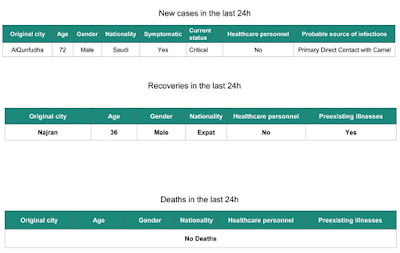 Two days ago Crof carried a media report Saudi Arabia: A MERS case in critical condition of a new case, but obviously not the one reported, as it was of a 60 y.o. from Al Ahsa.


Today marks exactly 3 months since the last WHO DON (with a line listing of cases) was published on Saudi MERS cases, which is the longest gap I've seen in years.

We have seen monthly WHO EMRO summary Reports (see here and here), but their case counts have differed sharply from the Saudi MOH reports.

As concerning as this gap in reporting is  - the good news is -  we've still seen no signs of any sustained or efficient transmission of the MERS virus outside of health care facilities.


But with the holy month of Ramadan now less than 3 weeks away (May 16th) - which will bring with it a surge in international religious pilgrims second only to the Hajj - some better reporting from the MOH would be welcome.