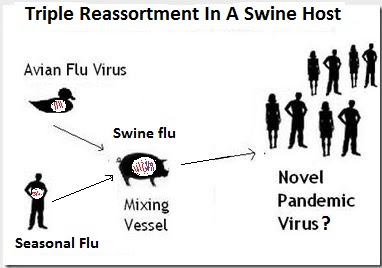 
Two and a half years ago, Chen Hualan - director of China's National Avian Influenza Reference Laboratory - gave an interview to the Chinese News Agency Xinhua where she pegged the EA (Eurasian Avian-like) H1N1 swine virus (EAH1N1) as having perhaps the greatest pandemic potential of any of the novel viruses in circulation.

"Based on scientific analysis and comprehensive comparison of the main animal flu viruses: H1N1, H3N2, H5N1, H7N9, H9N2 and EAH1N1, we found the EAH1N1 is the one most likely to cause next human flu pandemic. We should attach great importance to the EAH1N1."
(Continue . . . )

Her comments came after the publication of her paper (see PNAS: The Pandemic Potential Of Eurasian Avian-like H1N1 (EAH1N1) Swine Influenza) by Hualan et al. that described the Prevalence, genetics, and transmissibility in ferrets of Eurasian avian-like H1N1 swine influenza viruses.

In the case of EAH1N1, it is of a different lineage than the classical H1N1 virus (which emerged during the 1918 pandemic), and it has been circulating in parts of Europe and China since 1979, and has become the predominant swine flu virus in China.

While avian H5 and H7 viruses get much of our attention - primarily because when they do infect humans they tend to exact a very high mortality rate - swine (H1, H2 & H3) viruses are thought to be more likely to jump to humans and spark a pandemic (see Are Influenza Pandemic Viruses Members Of An Exclusive Club?).


Since 2015 we've revisited the EAH1N1 story several times, including:

In June of 2016, in Sci Rpts: Transmission & Pathogenicity Of Novel Swine Flu Reassortant Viruses we looked at a study where pigs were experimentally infected with one of these Eurasian-Avian H1N1 swine influenza viruses and the 2009 H1N1pdm virus.


`Most of reassortant viruses were more pathogenic and contagious than the parental EA viruses in mice and guinea pigs'.

A few months later, in EID Journal: Reassortant EAH1N1 Virus Infection In A Child - Hunan China, 2016, we reviewed the case report on a 30-month old child from Hunan Province, who was infected with one of these reassortant EAH1N1 - H1N1pdm viruses.


They described this reassortant virus as:

Not only did we learn about the course, and severity, of the child's illness, we also learned that in a mouse model, this reassortant virus displayed increased infectivity and virulence over other EAH1N1 viruses tested.

Fast forward to this week, and we have a new open access study published in Emerging Microbes & Infections which explores the impact of one of the amino acid substitutions (D701N in the PB2 protein) detected in that reassortant EAH1N1 virus.


D701N, you may recall, has been linked to mammalian adaptation of avian flu viruses (see Dual E627K and D701N mutations in the PB2 protein of A(H7N9) and increased virulence in mammalian models.

This is a long, at times technical read, so I've only included the abstract and a few excerpts.  Those wishing to delve deeper will want to follow the link to read it in its entirety.

Eurasian avian-like H1N1 (EA H1N1) swine influenza viruses (SIVs) have become predominant in pig populations in China and have recently been reported to have the most potential to raise the next pandemic in humans.

The mutation D701N in the PB2 protein, which accounts for 31% of H1N1 SIVs, has previously been shown to contribute to the adaptation of the highly pathogenic H5N1 or H7N7 avian influenza viruses in mammals. However, little is known of the effects of this substitution on the EA H1N1 viruses.

Our results found that viral polymerase activity, viral replication, and pathogenicity in mice were indeed enhanced due to the introduction of 701N into the PB2 protein, and the increased viral growth was partly mediated by the host factor importin-α7. Thus, substantial attention should be paid to the D701N mutation in pig populations.


Considering the possibility of EA H1N1 SIVs causing a future human influenza pandemic and the great significance of the 701N mutation in host adaptation, our study focused on the effects of the substitution of the mammalian signature 701N in the PB2 protein on this newly emerged reassortant (A/Hunan/42443/2015(H1N1), HuN EA-H1N1, accession nos. EPI691392-EPI691399 in the GISAID database) isolated from a severely ill child. This virus was a genetic reassortant of the EA H1N1 virus and had a D at position 701 in the PB2 protein9.


The upshot is that this D710N substitution significantly enhanced viral replication and pathogenicity of the EAH1N1 virus in mice, and may have contributed to the severity of the child's illness in Hunan.

Not unlike the findings reported last fall (see J. Virology: A Single Amino Acid Change Alters Transmissability Of EAH1N1 In Guinea Pigs) that found different amino acid (AA) change (G225E in HA1) `plays a critical role in the transmission of EAH1N1 virus by increasing the efficiency of viral assembly and budding.'


In their concluding remarks, the authors (Hualan et al.)  wrote: `These findings suggest that the pandemic potential of the EAH1N1 SIVs is increasing.'

Since much of what goes on in the pig population of China (or, for that matter, around the world) goes largely unmonitored, we really don't know how close we are to seeing another reassortant swine origin virus emerge as a pandemic threat.

Last month, however, in Trans. & Emerg. Dis.: Appearance Of Reassortant European Avian‐origin H1 influenza A viruses in Swine - Vietnam, we saw a worrisome report on the spread of two European avian‐like H1N2 IAVs‐S viruses in Vietnam - which both included internal genes from the human H1N1pdm09 virus.

And while EAH1N1 is the prime swine-origin virus of concern in China, it isn't alone in that regard (see Front. Microbiol.: A Novel H1N2 Reassorted Influenza Virus In Chinese Pigs).


The emergence of novel swine viruses is truly a global concern, with new strains continuing to pop up in North America, South America, Europe and Asia.

Their ability to reinvent themselves through reassortment with human, avian, and swine viruses, the shipment of live pigs nationally and internationally, and the growth in the global pork industry in general, pretty much ensures this trend will continue.

A few past blogs include: