Thirty-six months ago the biggest story in the infectious disease world was the unprecedented outbreak of MERS-CoV that spread across 16 hospitals in South Korea, where more than 180 patients, family members and staff were infected (see June 2015 WHO MERS Situation Assessment For Korea).

Although sparked by a single imported case, the virus spread like wildfire due to a handful of `super spreaders', whose impact was magnified by overcrowded hospital Emergency Rooms and hospital wards (see Superspreaders & The Korean MERS Epidemiological Report). 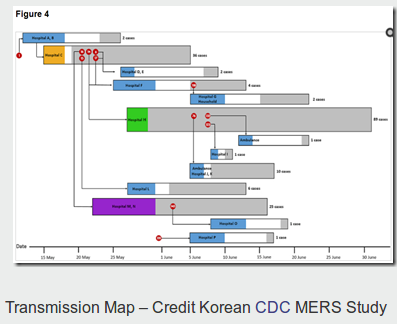 The Epidemiological report, issued in October of 2015 summed up the human carnage:


A total of 186 confirmed patients with MERS-CoV infection across 16 hospitals were identified in the Republic of Korea. Some 44.1% of the cases were patients exposed in hospitals, 32.8% were caregivers, and 13.4% were healthcare personnel.

Out of these 186 cases, at least 37 died.  But that is far from the full story, for over the 5 month ordeal - which included a surprise relapse of a `cured' patient (see Korean Govt. Statement On MERS Patient `Relapse’ and Isolation), and the quarantining of thousands of people (see Korea Puts More Teeth In Their Quarantine Laws) - there was a severe, and for some, permanent emotional toll as well.


There were obviously personal losses, of family members or friends to the disease, and fears of a larger epidemic were rampant for weeks.

But less apparent, and rarely discussed, there was the incredible emotional toll and stress borne by healthcare workers - primarily nurses - who were on the front lines and in direct contact with infectious patients on a daily basis.


While we would like to believe that healthcare workers are somehow immune to the stress of working during an epidemic - often short handed and for extended hours, sometimes without proper protective gear or complete knowledge of how the virus spreads - the truth is they are far from unbreakable.

Providing patient care is not only stressful, it can be dangerous. Not only to the healthcare provider, but potentially for their loved ones at home.  In Saudi Arabia, more than 10% of MERS cases are among HCWs, and in a few cases they appear to have brought the virus home with them.


We've seen the tragedy of the deaths of over 500 Health Care workers due to Ebola in West Africa (who often worked without proper protective gear), the deaths of two nurses due to SARS in Canada (Nelia Laroza, age 52 - and Tecla Lin, age 58) (see Canadian Study: Nurses Left Short In A Crisis), and the infection of two nurses with Ebola in Texas (see Nurses Claim Lack Of Safety Protocols For Dealing With Ebola).


All of which brings us to a new study, published in the International Journal of Healthcare, that follows up on a subset of nurses from just one of the hospitals impacted by the MERS-CoV outbreak in Korea, that finds at least half of those studied suffered from PTSD as a result of their experiences during the epidemic.

I've reproduced the abstract below, and the  link to the full PDF.  You'll want to follow the link to read the study in full.  When you return, I'll have more on the potential impact of the next pandemic on healthcare workers.

Background: The unprecedented nationwide outbreak of the Middle East Respiratory Syndrome Coronavarius (MERS-CoV) from June to July in 2015 took the Korean healthcare system unexpectedly and created physical and psychological stress and trauma to Registered Nurses unprepared to deal with the viral outbreak.

Methods: A descriptive cross sectional design using a self-administered survey of a convenience sample of 112 Korean RNs. The Impact of Event Scale-Revised-Korean version (IES-R-K) for PTSD and the Maslach Burnout Inventory-Human Services Survey (MBI-HSS) for burnout were utilized.

Conclusions: Future anticipatory guidance and management of traumatic outbreak or disaster should be considered for nurses’ mental health. Public health and safety at the national level must address quality health outcomes for both patients and healthcare professionals alike.


As serious, dangerous, and stressful as this MERS-CoV outbreak in South Korea was, it was relatively short-lived, and limited to just 16 hospitals.  Yet the long-term impact on the mental health of those involved was profound.

All of this has extreme importance when considering the next pandemic, as the attrition of healthcare personnel - either due to illness, stress or PTSD, staying home to care for family members, or simply being unwilling to work in an increasingly dangerous and deteriorating workplace - will almost certainly severely degrade our ability to provide medical care to anyone.


While most HCWs will probably work in the opening days and weeks of a pandemic - assuming that proper PPEs (masks, gloves, gowns, etc.) are made available - a prolonged severe epidemic would take a tremendous physical and mental toll.

In April of 2017, in PSAF Is The New Pandemic Severity Index, we looked at the revised 2017 CDC/HHS Community Pandemic Mitigation Plan, which provided a new gauge of pandemic intensity based on multiple criteria; the PSAF (Pandemic Severity Assessment Framework). 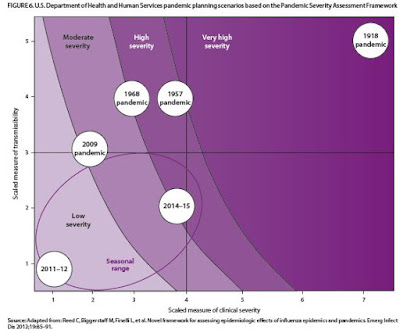 While the 1918 pandemic (upper right) is off by itself in terms of both transmissibility and clinical severity - and resulted in the deaths of between 50 and 100 million people - that isn't necessarily the top of the scale. It is just the worst we've seen in modern times.


A moderately severe pandemic - like 1957's H2N2 influenza - could still kill hundreds of thousands of Americans, and millions worldwide.

But as PPEs become in short supply, the number working HCWs - either due to illness, death, burnout, or refusing to work without protection - will begin to drop, putting even more pressure on the ever dwindling workforce.


Staff shortages - along with shortages of everything from PPEs, to IV supplies and meds, to hospital beds (see Supply Chain Of Fools (Revisited)) - will further exacerbate the stress, and the resultant fallout among HCWs.

In the epilogue video  (below) from last month's Johns Hopkins Clade X Tabletop Pandemic Exercise, the butcher's bill read, in part: `. . . 20 months into the pandemic . . . half of all healthcare workers had either died, become disabled, or quit . . .' 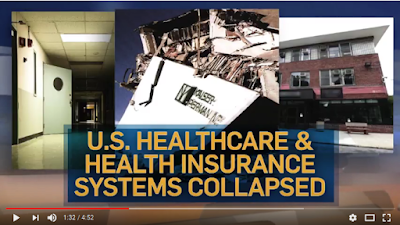 As the video explains, collateral damage from the collapse of the health care system likely killed more people than the actual virus.  And without the front line personnel - primarily nurses and techs, but also including housekeeping, food service, and clerical -  a hospital cannot function.

I'm not entirely sure that anything can be done to adequately prepare for an extreme pandemic, such as is depicted in the Clade X exercise.  But the greater tragedy would be if our healthcare system - and countless lives - were destroyed by a lesser scenario.


One that could have been manageable, had the proper steps been taken before it began. Something worse than 1957, but perhaps not quite as bad as 1918.

So far, our track record for being ready to deal with even lesser outbreaks hasn't been very good.
A lack of PPEs is often cited as the main reason why HCWs might not being willing to work during a pandemic. And its not a matter of courage, or lack of fortitude.


A sick, dead, or permanently disabled health care worker, due to not having proper PPEs, is a futile sacrifice that only increases the burden on the system.

Six years ago, in Study: Willingness of Physicians To Work During A Severe Pandemic, we looked at a study  published in the Asia Pacific Family Medicine journal, that polled Canadian doctors to try to determine under what circumstances they would be unwilling to work during a pandemic.


Although limited by only a 22% response rate to the poll, under certain scenarios, fewer than half of the doctors who responded would be willing to report for work during a severe pandemic.

The numbers from that Canadian poll are not out of line with previous studies we’ve seen, including a 2010 report (See Study: Willingness Of HCWs To Work In A Pandemic) that polled 18,612 employees of the Johns Hopkins Hospital from January to March 2009, and found:


Demographic and professional distribution of respondents was similar to all hospital staff. Overall, more than one-in-four (28%) hospital workers indicated they were not willing to respond to an influenza pandemic scenario if asked but not required to do so. Only an additional 10% were willing if required. One-third (32%) of participants reported they would be unwilling to respond in the event of a more severe pandemic influenza scenario.

In many ways, our battle against the next severe pandemic will be either won or lost in hospital wards all across the nation. And while there are a lot of potential points of failure (lack of beds or ventilators, lack of IVs or meds, etc.), if we don't have the nurses, techs, EMTs and their support staff willing and able to work, it's pretty much game over.


If we lose the ability to provide reasonable health care - not only to pandemic victims, but also to those with heart attacks, strokes, cancer, and trauma - the societal and economic impact of the next pandemic could be unfathomable.

Those are the real stakes we are talking about when we blithely talk in abstract terms about the world not being ready for a pandemic. While there are plans in place, too often they are based on unrealistically mild scenarios, or depend on resources that will either be in scarce supply or simply unavailable.


Although the development of a universal flu vaccine would be a great advantage in the next pandemic - assuming it works, and the pandemic is caused by influenza -  if our healthcare system collapses early on, so will our ability to deploy the vaccine.

Something worth thinking about when we talk about what our pandemic planning priorities ought to be.