Not quite 10 years ago, in Supply Chain Of Fools, we looked at growing concerns over our increasingly stretched, and fragile, supply chains and how they might fare during a pandemic or other disaster.


Eight months later, in the opening weeks of the 2009 H1N1 pandemic, we saw first hand how quickly the supply of masks and gowns can be depleted (see California Nurses Association Statement On Lack Of PPE and Nurses Protest Lack Of PPE’s) during a global health crisis.

Fortunately, H1N1pdm did not turn out to be a particularly virulent strain, and so demand never came close to the HHS estimate that our nation would need 30 billion masks (27 billion surgical, 5 Billion N95) to deal with a major pandemic (see Time Magazine A New Pandemic Fear: A Shortage of Surgical Masks).


Since the vast majority of the gloves, gowns, and masks used by U.S. hospitals are now manufactured in places like China, Singapore, Malaysia, and Mexico - and are ordered in as needed rather than stockpiled - surge capacity during a health care crisis is very limited.

As a stopgap measure, in 2014's NIOSH: Options To Maximize The Supply of Respirators During A Pandemic we saw guidance designed to help Prolong Existing and Surge Capacity Supplies of Respirators during Infection with Novel Influenza A Viruses Associated with Severe Disease.

We saw a reprise of these PPE concerns in 2014 when two Ebola infected individuals entered the country, which touched off a nationwide effort to better prepare hospitals and employees to deal with highly contagious infections (see CDC: Best Practices On Procuring PPEs For Ebola Response).

But it isn't just gloves, gowns, and masks that will be in short supply.


IV bags, tubing, oxygen tubes, needles and syringes, and nearly all of our pharmaceutical drugs (including antibiotics & antivirals) . . .  essentially everything needed to run a hospital or pharmacy . . .  is either made overseas or is dependent on raw materials from other countries.

This past winter's moderately severe flu season was complicated by a nationwide shortage of saline IV bags  (see FDA Statement) - which we normally import from Puerto Rico - but which were in short supply after hurricane Maria knocked out the island's electrical grid.

During `normal' times, this model works fairly well, although drug shortages continue to plague the medical industry (see current FDA list).  According to an FDA infographic, the reasons are many and varied. 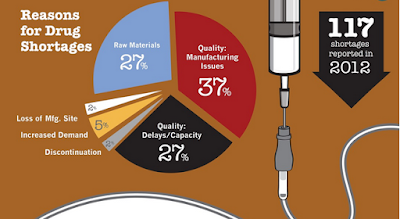 
In a white paper released today, the Dutch nonprofit Access to Medicine Foundation argues that a fragile global supply chain that's dependent on a small number of antibiotics manufacturers, along with a financially unstable economic model, are responsible for shortages of antibiotics on a global and national level. Because of these shortages, some patients in need of antibiotics are being treated with lower-quality medications that don't cure their infections and increase the risk of resistance.

In 2015 - after the slow response to the Ebola outbreak in West Africa -  a public-private partnership called the  Pandemic Supply Chain Network (PSCN) was created following the World Economic Forum annual meeting in Davos, in order to develop better ways to help ensure the delivery of goods during a pandemic.


While a admirable initiative, how much impact this effort will have during a major pandemic or other crisis is unknown and untested.

Much will depend upon the perceived severity and speed of a pandemic threat.  During a particularly serious event, demand will likely quickly exceed existing manufacturing capacity.

Add in shipping delays dues to quarantines, border closings, or personnel loss - and the very real possibility of governments `nationalizing' factories or prioritizing their inventories for domestic use - and replenishment of supplies during a pandemic (or other crisis) is far from a sure thing.

During the relatively mild 2009 pandemic, we looked at shortages in OTC supplies as well (see UK: More Supply Chain Woes), where pharmacies in England reported a run on everything from surgical masks and thermometers, to antipyretics and anti-bacterial gels.


The US government does maintain a strategic national stockpile of PPEs, and many essential meds, including antivirals and antibiotics, but those supplies are finite, and might only last a few weeks in a severe pandemic (see Webinar: The Strategic National Stockpile).


While, for simplicity's sake, I've dealt only with the medical supply chain thus far, we could see similar shortages across a wide spectrum of goods and services; everything from food deliveries to local markets, to delivery of public utilities (water & electricity), to replacement parts for your car or computer.

And it isn't just a pandemic that could throw the global supply chain out of whack; large earthquakes or tsunamis in an important manufacturing area, regional conflicts, trade wars, solar storms and even cyber attacks (on the grid or Internet) could seriously disrupt manufacturing and/or delivery of goods.

Few people realize we barely escaped a grid down disaster six years ago (see NASA: The Solar Super Storm Of 2012). Last September, another major X-flare erupted just after it had passed around the limb of the sun, missing earth by only a few days (see USGS: Preparing The Nation For Severe Space Weather).

In 2014 a study was published suggesting the odds of earth being struck by one of these solar super storms is actually a lot higher than we’ve previously thought. From a NASA article:


In February 2014, physicist Pete Riley of Predictive Science Inc. published a paper in Space Weather entitled "On the probability of occurrence of extreme space weather events." In it, he analyzed records of solar storms going back 50+ years. By extrapolating the frequency of ordinary storms to the extreme, he calculated the odds that a Carrington-class storm would hit Earth in the next ten years.

The grid can also be taken down by other, more nefarious means, a topic explored by well known journalist Ted Koppel in his 2015 book called Lights Out: A Cyberattack, A Nation Unprepared, Surviving the Aftermath.


There are hours of interviews with Ted Koppel about his book on YouTube, including with PBS, Charlie Rose, and the following hour long discussion with the National Press Foundation.

This is a topic we've looked at before (see The Lloyd’s Business Blackout Scenario) - and despite congressional committees and national GridEx preparedness drills - a new Congressional Research Service report warns that the US power grid remains vulnerable to attack.


While our JIT Inventory economy is a modern marvel of logistics, statistics, and efficiency, it has a fatal flaw.  Everything has to work as designed, or it can unravel like a 3 dollar suit.

In 2005 Dr. Michael Osterholm, director of CIDRAP, likened a severe pandemic to an 18-month global blizzard, where nearly everything is shut down. Many will be without a paycheck, either due to their refusal to work and risk exposure, or because their jobs are simply no longer available (see Baby, it's Cold Outside).

More recently, in his 2017 book Deadliest Enemy (see my Review: Deadliest Enemy: Our War Against Killer Germs), Dr. Osterholm revisits the idea of our JIT economy, and writes:


Ironically, the ways we have organized the modern world for efficiency, economic development, and for enhanced lifestyle -- the largely successful attempts to transform the planet into a global village -- have made us more susceptible to the effects of infectious disease than we were in 1918.

And the more sophisticated, complex, and technologically integrated the world becomes, the more vulnerable we will be to one disastrous element devastating the entire system.

While developing and distributing a safe and effective vaccine may seem like the most logical, and important step, to mitigate the next pandemic - finding a way to keep the lights on, and the infrastructure running well enough to deliver a vaccine or lifesaving medical assistance to the public - may be the bigger challenge.


Collateral damage, not the infection itself, could prove to be the biggest killer during the next pandemic.

The inability to get routine or emergency medical treatment, or maintenance drugs (insulin, B/P or heart meds, antibiotics, etc.), or perhaps even sufficient food or potable water, could claim more lives than the virus.

While you and I cannot solve the big issues of trade, or strategic stockpiling, or JIT manufacturing, we can take steps to help ensure our families, and our businesses, have enough `extra' on hand to get through temporary interruptions in the supply chain.


No, it wouldn't go very far during a worst case 18-month economic blizzard scenario, but if we see something less, it could make the difference between your family or business surviving the next big crisis (economically, or physically) or not.

Despite initiatives like the Pandemic Supply Chain Network, congressional reports like last year's DHS: NIAC Cyber Threat Report, and our nation's investment in The Strategic National Stockpile, we remain seriously unprepared to deal with a major pandemic or global crisis.

Last month, in the day-long Johns Hopkins Clade X exercise, a genetically altered Nipah virus (spliced onto a parainfluenza backbone) was the fictional  basis of a severe pandemic.

Hopefully you've already taken the time to watch that 8 hour exercise.  But even if you haven't, I'd urge you to watch the 5 minute epilogue, which sums up the impact and is available on Youtube as a fictional news cast. 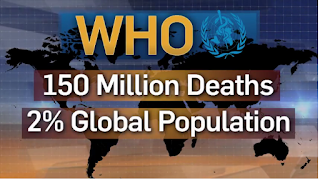 Even in this scenario, it's a toss up as to whether the virus - or cascading supply chain failures and collateral damage - ended up killing the most people.


While a vaccine against the next pandemic virus may be a long time coming, there are things we could be doing today -- as individuals, as business owners, as communities, and as nations - to better prepare so that we can keep the lights on, and life's necessities available, during the next pandemic.

The only question is whether we can find the foresight, fortitude, and political will to do something substantial before the next crisis takes that opportunity away from us completely.