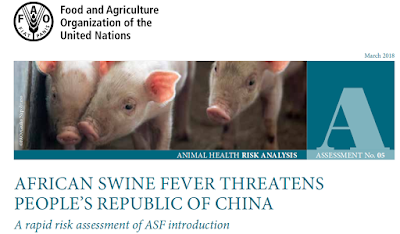 For the second time in two weeks China's MOA has confirmed an outbreak of African Swine Fever (ASF) among commercial pigs, this time originating in Heilongjiang Province.


Thirteen days ago, in China MOA: 1st Reported Outbreak Of African Swine Fever, we saw the report of the long anticipated, but dreaded first arrival of ASF to China among pigs in Liaoning Province, which borders North Korea.

This discovery prompted the Chinese MOA To Hold An Emergency Meeting On African Swine Fever (ASF) last week, where the Ministry announced a major offensive against this threat.


While not a human health concern, ASF could severely impact pork production in China, which provides much of the animal protein for the dietary needs of 1.4 Billion Chinese.

Within the past few hours China's MOA confirmed a second detection, this time at a Henan Province slaughterhouse, among pigs recently transported from Heilongjiang Province.

The news office of the Ministry of Agriculture and Rural Affairs was released on August 16th. A pig swine epidemic occurred in a slaughterhouse of a food company in Zhengzhou Economic Development Zone, Henan Province.

On August 14, a pig in a slaughterhouse of a food company in Zhengzhou Economic Development Zone of Henan Province died of unexplained deaths, with 260 heads, 30 diseases and 30 deaths. The quarantine certificate showed that the pigs came from Tangyuan, Jiamusi City, Heilongjiang Province. County Heli Town Trading Market. In the early morning of August 16, it was confirmed by the National Center for Animal Diseases and Diseases of the National Center for Animal Health and Epidemiology of China, and the epidemic was caused by the African swine fever.

After the outbreak, the Ministry of Agriculture and Rural Affairs immediately dispatched supervisory components to Henan and Heilongjiang. In accordance with the requirements, Henan has launched an emergency response mechanism and adopted measures such as blockade, culling, harmless treatment and disinfection to prohibit all pigs and susceptible animals and products from being transported into or out of the blockade. Heilongjiang Province has carried out investigations and epidemiological investigations. At present, the epidemic has been effectively controlled.


Considering that ASF was confirmed less than 24 hours prior to this announcement, the assurances that  `Heilongjiang Province has carried out investigations and epidemiological investigations. At present, the epidemic has been effectively controlled.' are probably best taken with a sizable grain of salt.

Meanwhile, the OIE has published the official notification (see below). 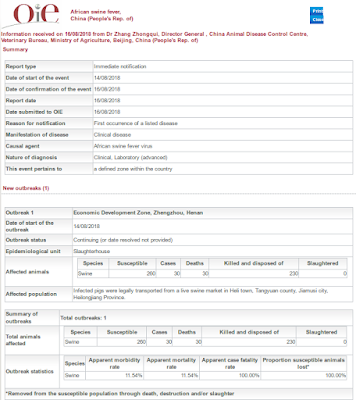 Strict blockade, disinfection, and movement control measures were conducted in the slaughterhouse. The local government launched the African swine fever contingency plan and emergency response according to the Standard & Protocol for African swine fever. All live pigs and animal products were prohibited to enter and exit the area. Epidemiological survey and screening have been initiated in the Heilongjiang province.

Technically, this outbreak is in Henan Province, although the infected pigs were recently transported from Heilongjiang province. Last March, the FAO issued a Rapid Risk Assessment on the potential for seeing ASF in China, where they wrote:


The most likely regions for ASf spread are the northeast (Heilongjiang), followed by the central eastern area (Henan, Shanxi, Ammui, and Hubbei) and the southeast (Hunan). Surveillance for swine diseases in this region should be heightened.

While one outbreak might be dismissed as happenstance, a second outbreak in another province within two weeks is a pretty solid sign that ASF has already established a beach head in China.

One which has the potential to become a major economic, and societal problem for China in the months ahead.

Posted by Michael Coston at 1:21 PM