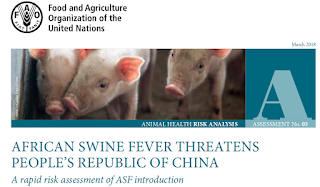 
Although news of new outbreaks has slowed coming out of China, with outbreaks in 6 provinces, there seems little doubt that African Swine Fever has gotten a foothold in Chinese commercial pigs.


While the exact route by which ASF arrived in China is not known, contaminated feed products have been strongly suspected, which is the focus of today's special announcement from the Chinese MOA.

Many of the hog feeding practices in China - including the use of swill (food scraps) - are banned in a lot of other countries, due to their potential for spreading diseases like ASF, Classical Swine Fever, and FMD.
Today's announcement prohibits the feeding of swill to pigs in any of the affected provinces, and surrounding regions. Pig feed manufacturers are also ordered to suspend the use of pig blood to produce pig feed.


Given the inconsistent record of China's food industry, it's not terribly surprising that today's announcement also includes provisions for commercial pig feed manufacturers to submit samples to the government for testing, and that their use be suspended by farmers until these results are released.

Exactly what farmers are expected to feed their pigs in China, pending these results, isn't mentioned.  China has also mandated a hog transport, and sales freeze in affected regions of the country and surrounding regions (see Reuters Report).

The (translated) announcement follows, after which I'll return with a postscript.

Announcement No. 64 of the Ministry of Agriculture and Rural Areas

Content overview: In order to do a good job in the prevention and control of pig swine in Africa, we will announce the matters related to strengthening the supervision of pig feed.

According to the "Law of the People's Republic of China Animal Epidemic Prevention Law", "Emergency Regulations on Major Animal Epidemics" and other laws and regulations, in order to do a good job in the prevention and control of the African swine fever epidemic, the relevant matters on strengthening the supervision of pig feed are announced as follows.

Second, this announcement has recently produced or marketed associated with swine feed products (including semi-finished products, defective products), feed production and sales Enterprises shall batches sampling inspection. Test results were negative for African swine fever virus nucleic acid, and can continue to sell; the test result is positive, feed production enterprises should take the initiative to recall products, and feed management department under the supervision of, to be on the safe disposal of related products.

Third, the farms (households) to suspend the use of feed products related to feeding pigs. Related feed products in stock, wait until the product test results, production and marketing enterprises for the African swine fever virus nucleic acid negative, can continue to use.

Fourth, the provinces outbreak of African swine fever have occurred in neighboring provinces and farms (households), may not use pig swill feeding; farms in other provinces (households), swill fed pigs may not be used without the high temperature treatment.

Fifth, around animal husbandry and veterinary departments should strengthen supervision and management, good organization within the jurisdiction of feed production and marketing enterprises related to sampling and testing work with swine feed products. Of confirmed positive product, should immediately organize and supervise the enterprises to recall the product, harmless treatment and retrospective investigation work, as well as related production facilities and sites, such as the cleaning and disinfection of vehicles in accordance with the relevant regulations. To do publicity and education, to use without the high temperature treatment of swill feeding pigs, to be strictly regulated by law. To actively coordinating relevant departments to implement the regulatory responsibility, strengthen swill whole chain management.

Ministry of Agriculture and Rural Affairs

The recent slowdown in outbreak announcements, while possibly a good sign, doesn't necessarily reflect what is happening on the ground.


Recent media reports (see RFA's China Clamps Down on Public Discussion of African Swine Flu Outbreaks), and the unceremonious burying of outbreak reports 3 levels deep on the MOA site (Home  >  public  >  Emergency Management  >  epidemic released), are indications that the government is doing what it can to manage the news.

We've seen this sort of `slow walking' of information by China before, and it usually indicates that the news isn't particularly good.

Posted by Michael Coston at 7:59 AM