African Swine Fever (ASF) was eradicated in Western Europe decades ago, but was reintroduced into Eastern Europe in 2007. Since then it has spread rapidly east through Russia, while making slower inroads towards Western Europe.


Yesterday the news broke that two wild boar in Belgium have tested positive for the virus, the first occurrence in that country in over 30 years.

This is a particular concern because this represents a westward jump of hundreds of miles into Western Europe, and places the virus on the border with both France and Luxembourg.

This Special Announcement from the Swine Health Information Center in Ames, Iowa.  Follow the link to read the full report:

African Swine Fever (ASF) has been confirmed in Belgium

Although it has not been officially reported to the OIE yet, preliminary reports indicate that ASF has been confirmed in two wild boars near the southern village of Étalle, in the province of Luxembourg, which is located 8 miles (12 km) from the border with France and 11 miles (17 km) from Luxembourg.

It appears to have jumped a considerable distance from previously affected countries, about 300 miles (500 km) from the border with the Czech Republic, 500 miles from Hungary, and 750 miles (1,200 km) from the border with Romania (approximate distances). The Belgian authorities report they are working to prevent the possible spread of the disease among wild boar and onto pig farms.


The OIE Notification has now been published (see below). 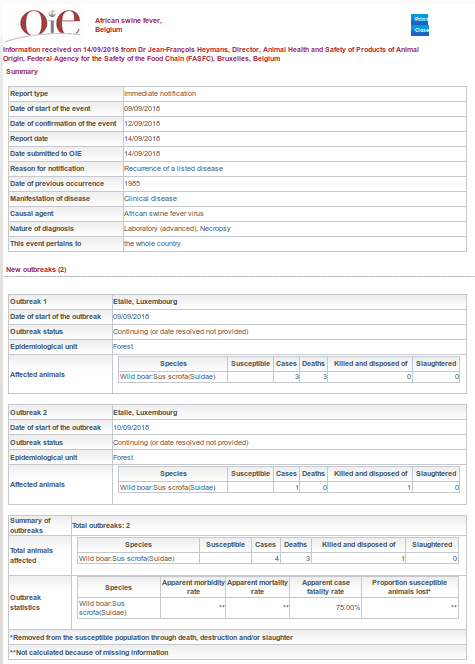 
Ten days ago, DEFRA Raised The Risk Of Importing ASF To UK To `Medium'. In light of these latest developments, I expect we'll be seeing another Risk Assessment from DEFRA in the next few days.

While ASF outside of Africa has been simmering in Eastern Europe for the past decade, over the past year we've seen it begin to make impressive geographic gains.

ASF is not a human health threat, but a greater spread of this virus could have major impacts on the economies, and even the food security, of many countries around the globe.