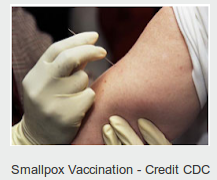 
Six days ago, in Eurosurveillance Rapid Comms: Two cases of Monkeypox imported to the UK, we saw the first real details on the two travelers from Nigeria who were diagnosed with Monkeypox in the UK earlier this month.


Among the things we learned is there was a delay in diagnosing their illnesses as being an infectious disease (Monkeypox had never been  seen in the UK), and a number of Health Care Workers had been exposed.

For that reason, 7 days ago we learned that the UK PHE Imported Smallpox Vaccine For HCWs Caring For Monkeypox Cases. According to the Eurosurveillance report:

Today, in a brief statement, the UK's PHE has announced the infection of one HCW who cared for the case at Blackpool Victoria Hospital before monkeypox was diagnosed.

Public Health England can confirm that a third individual has been diagnosed with monkeypox in England.

This person was involved in the care of the case in Blackpool Victoria Hospital before monkeypox was diagnosed.

This third case is now isolated to minimise the risk of onward transmission to others. They are being looked after in the specialist unit at Royal Victoria Infirmary, Newcastle.

We are following up with close contacts of this new case to provide advice and monitor their health. We are adopting a highly precautionary approach to minimise the risk of additional cases and are tracing anyone who had contact with this individual 24 hours before they noticed a rash.


This healthcare worker cared for the patient before a diagnosis of monkeypox was made. We have been actively monitoring contacts for 21 days after exposure to detect anyone presenting with an illness so that they can be assessed quickly. It is therefore not wholly unexpected that a case has been identified.

This person has been isolated and we are taking a highly precautionary approach to ensure that all contacts are traced.


The good news in all of this is they have a vaccine which is reportedly 85% effective, and the West African clade of Monkeypox is believed to be less virulent, and less easily transmitted, than the Central African clade.  Any large scale transmission in the UK is highly unlikely.


This is a reminder, however, that in our highly mobile society, any ER, clinic, or doctor's office in the world could see a patient who - 24 hours earlier - had been half a world away, and could potentially be carrying some pretty exotic viruses.

Reasons why continuous vigilance, and pandemic preparedness (see #NatlPrep : Because Pandemics Happen) need to be at the top of our nation's to do list.

Posted by Michael Coston at 6:56 AM