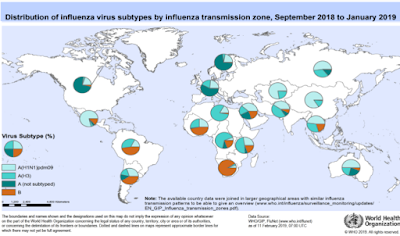 
Twice each year influenza experts gather to make recommendations for the next flu vaccine; once in September for the following year's Southern Hemisphere vaccine, and again in February for the Northern Hemisphere's fall-winter vaccine.


Decisions must be make months in advance to give manufacturers time to produce, package, and distribute tens of millions of doses before the start of the next flu season.

And while new vaccine manufacturing technology has shaved off some of the required lead time, the increasing complexity and diversity of seasonal flu viruses - which can spread and evolve much faster today due to our highly mobile society - make selecting vaccine viruses a far more difficult job with each passing year.

As the map above illustrates, at any given time, the flu season you see depends upon where you look. This year, H1N1 has been the predominate flu virus in the Northern Hemisphere - but with pockets of H3N2 in the Southern part of the United States, in some African countries, and in parts of Europe.


Further complicating matters, both of these Influenza A virus subtypes are constantly evolving, have divided (and continue to divide) into multiple subclades, which are constantly jockeying for dominance.

The challenge for the world's flu experts is to predict which of these battling subclades will be king of the viral mountain when the next flu season arrives six months from now.


As we saw in November of 2014 (see A `Drift’ In A Sea Of Influenza Viruses), the global fluscape can change abruptly, greatly reducing the effectiveness of the current vaccine.

This week the World Health Organization has brought together representatives from GISRS (Global Influenza Surveillance and Response System), along with members of OFFLU (the OIE/FAO Network on Animal Influenza), and other experts to recommend what flu strains to include in next fall's vaccine.


And this year, even more so than in recent memory, the world's seasonal flu viruses are in flux. So much so the WHO has taken the unusual move of delaying the selection of one of the major components - the H3N2 virus - until March 21st.

First, today's announcement - which includes a strain change for the H1N1 virus - then I'll return with more on why the WHO has taken the unusual step of delaying their H3N2 pick for another 30 days.

* In light of recent changes in the proportions of genetically and antigenically diverse A(H3N2) viruses, the recommendation for the A(H3N2) component has been postponed.

From the accompanying WHO FAQ on this year's selection:


Why is there a delay in selecting the A(H3N2) virus component of 2019-20 influenza vaccines?

Influenza A(H3N2) viruses have presented an increasing challenge for vaccine virus selection due to frequent changes in the virus and difficulties in generating candidate vaccine viruses for use in egg-based manufacturing. Experts at the consultation reviewed various sources of data including virus surveillance, antigenic characterization, and virus fitness forecasts, and identified multiple co-circulating influenza A(H3N2) virus groups.

In recent months, the proportion of viruses in one antigenically distinct group has increased in many countries, prompting a delay in the selection of the A(H3N2) vaccine component. This delay will allow more time for monitoring virus circulation and characterisation of appropriate vaccine viruses.


The H3N2 virus emerged as a pandemic strain in 1968 (supplanting seasonal  H2N2), settling in the following year as a seasonal flu strain and remained the sole human influenza A strain until 1977, when H1N1 mysteriously reappeared after a 20 year absence.

All of which makes H3N2 a bit long in the tooth, having been circulating now for more than a half century. Over that time it has had to reinvent itself innumerable times (via antigenic drift) to evade acquired immunity, resulting in an increasing number of subclades of the virus co-circulating around the globe.

For the past decade H3N2 viruses have all belonged to clade 3C, which have further divided into three subdivisions; 3C.1 , 3C.2, and 3C.3.  For the past few years, clade 3C.2 (and numerous subclades within it) have dominated.

In recent months, however, an upstart 3C.3 clade has begun picking up steam in some parts of the world, as explained in the following passage from a more detailed report released by the WHO today.

The majority of A(H3N2) viruses collected from September 2018 to January 2019 belonged to the phylogenetic subclade 3C.2a1b; however, the number of clade 3C.3a viruses has increased substantially since November 2018 in several geographic regions. There has continued to be considerable genetic diversification of the HA and NA genes, but viruses in subclade 3C.2a2 were much less prevalent than in the previous reporting period.

Antigenic characterisation of clade 3C.2a viruses continued to be technically difficult because a large proportion of viruses did not agglutinate red blood cells, preventing HI analysis of such viruses. Virus neutralisation assays have become the preferred method for determining the antigenic characteristics of current A(H3N2) viruses


The bottom line, while H3N2 clade 3C.2a1b is still the most prevalent strain, a long-shot 3C.3a subclade is making some moves, and WHO's experts would like another 30 days to see if that subclade's momentum continues.


While there is no one `perfect' vaccine strain that will guarantee protection against all circulating H3N2 viruses, it's a numbers game, and you want to match the strain most likely to be dominant next fall.

No easy task, and given that thousands of lives, millions of dollars, and the reputation of the flu vaccine are all at stake, be very thankful this isn't your decision to make.