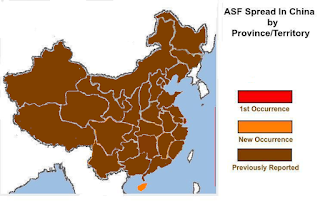 
Two days ago, in MOA: Hainan - China's Last Province Reports ASF, we saw the first four outbreaks of ASF to be reported from Hainan; the last of China's Provinces to report the virus.

The Information Office of the Ministry of Agriculture and Rural Affairs was released on April 21, and the African swine fever epidemic occurred in Xiuying District, Chengmai County, Baoting Li and Miao Autonomous County and Lingshui Li Autonomous County of Haikou City, Hainan Province.

Immediately after the outbreak, the Ministry of Agriculture and Rural Affairs sent a steering group to the local area. The local government has started the emergency response mechanism according to the requirements, and adopted measures such as blockade, culling, harmless treatment, disinfection, etc., to treat all the sick and culled pigs harmlessly. At the same time, all pigs and their products are prohibited from being transferred out of the blockade, and pigs are prohibited from being transported into the blockade. At present, the above measures have been implemented.


This is the 7th MOA announced ASF outbreak/epidemic in the past 3 weeks, and while the pace of reporting appears to be picking up after a 2-month lull, there are still concerns we are only seeing a small slice of a much bigger crisis.

Officially, China continues to report progress in controlling the disease, as in the following lede from a Beijing News report published today, which stresses the number of ASF affected regions that have been `unblocked', and rising pork prices.

The country has been unblocked since the epidemic 111; pig production was a continuation of a downward trend, the second half of the pork price rose or stage.

Two weeks ago, a Rabobank Research report estimated that between 150-200 million Chinese pigs have already been infected with ASF - more than all the pigs in Europe - and that China's pig production will drop 30% in 2019.

You'll find the full report at:

With official culled numbers hovering just over 1 million pigs culled in China due to ASF (see latest FAO report), this estimate suggests the crisis could be more than 100-fold larger.

It is likely that no one - not even China's MOA - has a good handle on the size and scope of China's ASF epizootic. There is a well-founded reluctance to report `bad news' up the chain of command to Beijing, as it invites central government scrutiny.

And in China, that has a history of sometimes not turning out well for local officials.

While ASF doesn't pose a direct threat to human health, is is devastating to pork producers, and its continued spread in China and across Asia could compromise already fragile food security in many regions.