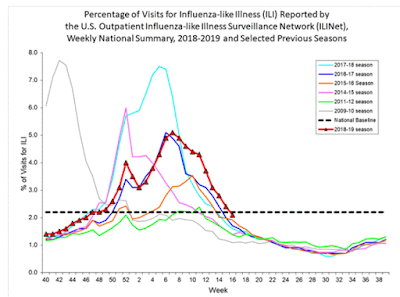 While there is undoubtedly still a bit of flu around, the CDC is reporting the first week (epi week 16) where ILI (Influenza-like Illness) doctors visits fell below the national baseline since mid-November of last year.


Our extended, double-humped flu season began as a relatively mild H1N1 season, and appeared on its way to an early demise right after the New Year, but an emerging H3N2 clade 3C.3a began to spread rapidly starting in January.

This H3N2 virus not only produced an extended flu season, it was more severe - particularly among the elderly - than the strain it replaced. While only estimates, the CDC graphic below suggests the winter 2018-19 flu season took a substantial toll. 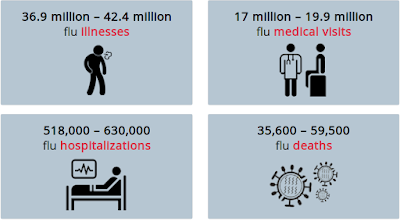 We should get a much better accounting and flu-season wrap-up and assessment from the CDC in the next couple of months.

I've posted some excerpts from the week 16 FluView Summary below. Follow the link to read the report in its entirety.

An overview of the CDC influenza surveillance system, including methodology and detailed descriptions of each data component, is available at http://www.cdc.gov/flu/weekly/overview.htm.

Influenza activity continues to decrease in the United States. Influenza A(H1N1)pdm09 viruses predominated from October to mid-February, and influenza A(H3N2) viruses have been more commonly identified since late February. Small numbers of influenza B viruses also have been reported.


Below is a summary of the key influenza indicators for the week ending April 20, 2019:

Editor's Note: I'm going to be out of town, and on the road, for the next three days and while I'll have my laptop with me, my opportunities to blog will be limited.  I expect to be back, and blogging my regular schedule by Monday night or early Tuesday.

In the meantime, to get your infectious diseases fix, I recommend checking in with Crof's Blog,  FluTrackers,  and Dr. Ian Mackay's Virology Down Under Blog.

I know I will.