The Air That We Breathe (Out) 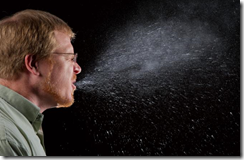 Not the only way to spread the Flu - Photo Credit PHIL


While it may not be exactly comforting to those of us who try to scurry away whenever someone sneezes in public, the evidence continues to mount that pre-symptomatic (and presumably asymptomatic) flu carriers are able to share their viruses with others simply via their normal exhaled breath.


No sneezing, coughing or fever required.

This has implications not only for controlling outbreaks in hospital settings (or for that matter, schools & workplaces), but also further reduces hopes that airport screening for `symptomatic' flu cases might be an effective way to keep a pandemic strain from entering country (hint: it isn't).

Nine years ago, in Japan: Quarantine At Ports Ineffective Against Pandemic Flu, we looked at a study that found -  between asymptomatic or mild infections, and a silent incubation period of several days - there wasn’t much chance of long-term success.


For every person identified, and quarantined, by port authorities  - researchers estimated 14 others infected by the virus entered undetected.

Back in 2011, in EID Journal: Pre-Symptomatic Influenza Transmission, we saw evidence of pre-symptomatic spread of the H1N1 virus in three clusters in Japan, which also suggested that asymptomatic carriers ought to be able to spread the virus as well.

And the following year, in PLoS One: Influenza Viral Shedding & Asymptomatic Infections, we saw a small study that found 21% of adult secondary influenza cases were asymptomatic or subclinical, yet they shed roughly the same quantity of virus as those showing clinical signs of illness.

More recently, about a year ago in PNAS: Infectious Virus Exhaled In Breath Of Symptomatic Seasonal Flu Cases, we looked at study that showed coughing and sneezing are not required to spread the flu virus.


“We found that flu cases contaminated the air around them with infectious virus just by breathing, without coughing or sneezing,” explained Dr. Donald Milton, M.D., MPH, professor of environmental health in the University of Maryland School of Public Health and lead researcher of this study.

“People with flu generate infectious aerosols (tiny droplets that stay suspended in the air for a long time) even when they are not coughing, and especially during the first days of illness. So when someone is coming down with influenza, they should go home and not remain in the workplace and infect others.”


The CDC's take on all of this reads:


When Flu Spreads
People with flu are most contagious in the first three to four days after their illness begins. Most healthy adults may be able to infect others beginning 1 day before symptoms develop and up to 5 to 7 days after becoming sick. Children and some people with weakened immune systems may pass the virus for longer than 7 days.

Symptoms can begin about 2 days (but can range from 1 to 4 days) after the virus enters the body. That means that you may be able to pass on the flu to someone else before you know you are sick, as well as while you are sick. Some people can be infected with the flu virus but have no symptoms. During this time, those people may still spread the virus to others.

You may be able to pass on flu to someone else before you know you are sick, as well as while you are sick.

Since all science is incremental, our understanding of how flu transmits is continually evolving.

Today we've a press release (bolding mine) on a hospital study - to be presented this week at the European Congress of Clinical Microbiology & Infectious Diseases (ECCMID) in Amsterdam - which documents the apparent stealth transmission of influenza by pre-symptomatic carriers in a hospital setting.

New research examining influenza transmission in a tertiary hospital finds that a substantial proportion of patients and healthcare works shed the flu virus before the appearance of clinical symptoms.

The findings, being presented at this year's European Congress of Clinical Microbiology & Infectious Diseases (ECCMID) in Amsterdam, Netherlands (13-16 April), raise the possibility that current influenza infection control measures may not be enough to protect healthcare workers and patients during routine care in hospitals.

The discovery came after Swiss researchers tracked almost 700 healthcare workers and inpatients over two consecutive influenza seasons at the University Hospital in Zurich. They uncovered several transmission clusters that were undetected by routine surveillance.

These results are consistent with previous research which suggests influenza may be spread to others by just breathing, and that coughing or sneezing are not required for transmission [1].

To provide more evidence, Dr Stefan Kuster from the University Hospital and University of Zurich in Switzerland and colleagues conducted a prospective study of influenza virus transmission trajectories in 542 patients on medical wards and 152 acute care healthcare workers working on the same wards during the 2015/2016 and 2016/2017 influenza seasons.

The team tracked flu infection through nasal swabs collected daily, and performed diagnostic multiplex real-time PCR and RNA sequencing on specimens. Contacts between participants were traced, and participants were asked to completed daily diaries of any illnesses.

During the study, 16 (11%) healthcare workers and 19 (4%) inpatients tested were diagnosed with an influenza infection. Most of these 35 participants experienced influenza symptoms, particularly respiratory symptoms, when their tests were positive.

Importantly, 17% (12/71) of influenza-positive swabs from healthcare workers and 8% (3/38) from patients were collected on days that they did not report flu symptoms.

Furthermore, among symptomatic individuals, 14% (2/14) of healthcare workers (but none of the 17 symptomatic inpatients) had a positive influenza test before symptoms developed.

"Our findings suggest that influenza infection in acute care is common and a significant proportion of individuals appear to shed influenza virus without harbouring any symptoms, making the spread of flu very difficult to control even with self-diagnoses and current infection control practices", says Dr Kuster. "Influenza vaccination is not perfect but remains the best tool we have to protect healthcare workers and their patients from severe illness."

The authors note that more research on how influenza is transmitted in hospitals is needed before it can be firmly established whether people with no clinical symptoms may be contributing to the spread of the virus without realising.

The authors note several limitations including that the study was conducted in a single institution, and the total number of influenza events was moderate. They also note that because participating wards were alerted to the influenza problem, they may have paid more attention to prevention measures, and it is possible that transmission rates may generally be higher than seen in the study.


One of the reasons SARS was contained in 2003 was that SARS cases weren't infectious until they become symptomatic (cite Infectivity of severe acute respiratory syndrome during its incubation period).


Influenza viruses don't suffer under the same limitation, making them much harder to contain and control.

When you add in their ability to rapidly evolve through antigenic drift or shift (reassortment), plus their ability to cause severe morbidity and high mortality,  influenza viruses become the nearly perfect viral nemesis for humankind.

All reasons why - of all of the pandemic threats that are out there - novel flu viruses are the ones that keeps most scientists up at night.