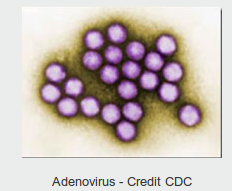 
When it comes to severe, sometimes fatal, respiratory viral infections - influenza gets most of our attention - primarily because it is highly mutable, causes annual epidemics, and is estimated to kill more than 500,000 people each (non-pandemic) year (see The Lancet: Estimates Of Global Seasonal Flu Respiratory Mortality).

But a wide array of adenoviruses, rhinoviruses, coronaviruses and other non-influenza viruses cause far more human infections each year. Even during the height of the 2009 H1N1 pandemic, roughly 70% of the respiratory samples sent to the CDC for analysis were not positive for the influenza virus (see ILI’s Aren’t Always The Flu).

While most of these viruses produce only mild to moderate illness, in some cases, particularly among susceptible populations, they can be deadly.

Until 2003, coronaviruses were thought to only cause mild, cold-like illnesses in humans, but that changed following the emergence of SARS in China. In 2012, a second, often fatal coronavirus emerged in the Middle East (MERS-CoV), and we are now watching other regions of the world for other threats (see Potential For Zoonotic Emergence Of Coronavirus In Latin America).

Adenoviruses - of which there are scores of known serotypes - are also a common cause of respiratory illnesses in both adults and children. Many outbreaks go unreported, however, because it is not a nationally notifiable disease; clinicians are not required to test for, or report it, to health departments or the CDC.
Long time readers will recall that back in 2012 there was a brief media flap over what was initially feared to be a return of SARS in China, but was quickly  identified as Ad55 (see China Denies Internet Rumor Of SARS Outbreak and China: Hebei Outbreak Identified As Adenovirus 55).


News from China is often seriously lacking in detail, and other than vague reports of `scores hospitalized', we learned very little about that outbreak.

Today, however, we have a research letter published in the EID Journal that details a household outbreak of Ad55 in Anhui province - roughly 1,000 km to the south of the Hebei outbreak - which occurred roughly 6 weeks later.


While the Hebei outbreak wasn't mentioned in this report, the authors reported that the Anhui virus was very similar to one that sparked a serious outbreak in Shanxi Province 6 years earlier.

First, some excerpts from the EID article, then I'll return with a bit more about the 2006 Shanxi, China outbreak.

Human adenoviruses are associated with mild and acute respiratory infections, depending on the virus type and host immunity. Human adenovirus type 55 (HAdV-55) (1), formerly known as HAdV-11a (2), is a reemergent respiratory pathogen that has caused severe pneumonia outbreaks in military and civilian populations in Europe and Asia (2–7). However, household transmission of HAdV-55 is rarely reported. We report a case of household transmission of HAdV-55 involving 3 confirmed adult cases with 1 death. Epidemiologic, clinical, and laboratory investigations, along with whole genome sequencing, elucidate the disease progression and the pathogen origin.

During April 1–May 5, 2012, 7 household members (5 males and 2 females; 3 children and 4 adults) in Anhui Province, China sequentially experienced influenza-like symptoms, including fever, productive cough, fatigue, pharyngalgia, dyspnea, and other symptoms. The youngest patient was 4 months of age, the oldest, whom we refer to as AQ-1, was a 55-year-old man. The family lived together near a farm in a house with poor sanitary and ventilation conditions.


We isolated AQ-1’s adenovirus in culture and sequenced the genome (GenBank accession no. KP279748). Sequences for the hexon, penton base, and fiber genes were identical to those previously reported for HAdV-55. Phylogenetic analysis showed that the 3 isolates clustered closely with other strains from China (Appendix Figure 2). The genome of AQ-1’s strain had the highest nucleotide identity (99.951%) with QZ01_2011, an isolate from a military trainee in Shanxi Province, China. The second highest identity (99.948%) was with QS-DLL_2006, which caused a fatal ARD outbreak in a senior high school in Shaanxi Province, China (1, 8) (Appendix Table). We hypothesize the strain infecting AQ-1 and his family originated from Shanxi Province.

In this household transmission of ARD, the index case was a probable case because no specimens were collected to confirm virologic identification. From the timeline of illness onset in this household cluster of ARD cases (Figure), we suspect that the pathogen spread rapidly among the children and further circulated in adults who had close contact with infected children and one another.

Ms. Jing was a graduate student at Southern Medical University and works at Zhuhai Center for Disease Control and Prevention, Guangdong Province, China. Her research interest is the epidemiology of human adenoviruses. Jing Zhang is a PhD candidate at Southern Medical University, Guangzhou, China, whose primary research interests are genomics and evolution of human adenoviruses.

A fuller description of the 2006 Shanxi Ad 55 outbreak was published a decade ago:

Outbreak of acute respiratory disease in China caused by B2 species of adenovirus type 11.


An outbreak of acute respiratory tract infection occurred in Shanxi Province, China, from March to April 2006. Of the 254 patients affected by this outbreak, 247 patients were students of a senior high school; 1 of these patients died during the outbreak. Serological tests and blood culture revealed no evidence of bacterial infection.

The results of direct reverse transcription-PCR or PCR performed with clinical specimens collected from the patients, including the sole patient who died, were positive for human adenoviruses (HAdVs) but negative for influenza virus, measles virus, rubella virus, mumps virus, parainfluenza virus, respiratory syncytial virus, and human enteroviruses. These findings were confirmed by enzyme-linked immunosorbent assay for HAdV immunoglobulin A, the conventional neutralization test, and viral isolation and identification.

Sequencing of the entire hexon gene revealed that HdAV type 11a (HAdV-11a) belonging to the B2 species of HAdV was the etiological agent responsible for the outbreak. However, both the analysis of the phylogenetic relationship and the similarity plot indicated that the sequence of the 3' end of the hexon gene outside the hypervariable regions the HAdV-11a strain isolated in this outbreak may be a recombinant with the sequence of the HAdV-14 strain of species B2.

Although isolates of HAdV species B2 seldom cause respiratory infections, they may pose a new global challenge with regard to acute respiratory diseases; this possibility cannot be overlooked and should be carefully considered. Hence, the need to establish and improve both epidemiological and virological surveillance of HAdV infections in China should be emphasized. LESS


In addition to causing respiratory illnesses - ranging from `common cold' symptoms to pneumonia and bronchitis - adenoviruses can cause other ailments such as gastroenteritis, conjunctivitis, cystitis, and rash-associated illnesses.


Infected hosts can shed the virus for prolonged periods of time, even though they may no longer be symptomatic (cite).

Between its broad tissue tropism, and its ability to continually reinvent itself through recombination (see Sci Repts Molecular evolution of human adenoviruses), these versatile DNA viruses are well worth our continued attention.