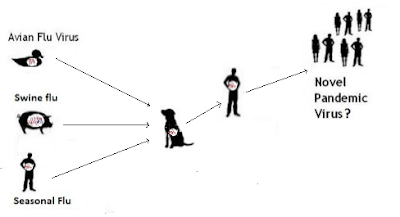 
Up until 15 years ago, influenza viruses had never been identified in dogs. That changed when an equine H3N8 virus mutated enough to adapt to a canine host, and began to spread among greyhounds at a Florida race track in 2004 (see EID Journal article Influenza A Virus (H3N8) in Dogs with Respiratory Disease, Florida).


Two years later, and half-way around the world, another (avian-origin) influenza virus (H3N2) turned up in domestic dogs in Guangdong Province (see Avian-origin H3N2 canine influenza A viruses in Southern China), and rapidly spread across Asia.

As companion animals, dogs have unique access to humans - and frequent opportunities to come in contact with wildlife - so we watch the evolution of canine (and feline) influenza viruses closely.

Over the past dozen years we've seen a number of avian, swine, and human flu viruses turn up in dogs; enough that dogs are now considered a suitable host and potential `mixing vessel' for a number of novel flu strains.


Although currently regarded as a relatively low-risk virus - two years ago the CDC added Canine H3N2 to their IRAT (Influenza Risk Assessment Tool) listing of novel flu subtypes/strains that circulate in non-human hosts and are believed to possess some degree of pandemic potential.

A few (of many) previous blogs on canine flu infection includes:

And nowhere have we seen this more than in China.
All of which brings us to a new open access study, published this week in Emerging Microbes and Infections, which details  3 swine-origin H1N1 IAVs-C (Influenza A Virus - Canine) and 1 reassortant H1N1 IAV-C collected in Guangxi Province, China.

This is a lengthy and detailed report, and I've only include a few excerpts. Follow the link to read it in its entirety.

Host switch events of influenza A viruses (IAVs) continuously pose a zoonotic threat to humans. In 2013, swine-origin H1N1 IAVs emerged in dogs soon after they were detected in swine in the Guangxi province of China. This host switch was followed by multiple reassortment events between these H1N1 and previously circulating H3N2 canine IAVs (IAVs-C) in dogs.

To evaluate the phenotype of these newly identified viruses, we characterized three swine-origin H1N1 IAVs-C and one reassortant H1N1 IAV-C.

We found that H1N1 IAVs-C predominantly bound to human-type receptors, efficiently transmitted via direct contact in guinea pigs and replicated in human lung cells. Moreover, the swine-origin H1N1 IAVs-C were lethal in mice and were transmissible by respiratory droplets in guinea pigs. Importantly, sporadic human infections with these viruses have been detected, and preexisting immunity in humans might not be sufficient to prevent infections with these new viruses.

Our results show the potential of H1N1 IAVs-C to infect and transmit in humans, suggesting that these viruses should be closely monitored in the future.

Our previous study demonstrated that swine-origin H1N1 IAVs have emerged in canines and that dogs served as “mixing vessels”, facilitating reassortment with other canine influenza viruses, such as H3N2s [13 ].

With the expansion of the IAVs-C gene pool and extensive contacts between humans and pets, the potential threat posed by IAVs-C is also increased.

The Centers for Disease Control and Prevention in the United States developedan Influenza Risk Assessment Tool (IRAT), which was created in collaboration with an international group of influenza experts to evaluate influ­enza viruses that are not yet readily transmissible in human population for their potential risk of emergence and poten­tial effect on the public’s health [50].

By using IRAT, we evaluated the pandemic potential of different influenza A virus strains. Similar to the newly emerged highly pathogenic avian influenza H7N9, we found that our H1N1 IAVs-C were also categorized into a moderate-to-high level in potential risk for emergence in humans (Table S4) with a moderate-to-high potential public health impact (Table S5).

To our knowledge, H1N1 IAVs-C are the only viruses circulating in a pet population that have phenotypes conducive to human transmission.

However, at this time there is no surveillance (serological or virological) for these viruses in humans in Southern China, and the frequency of human exposure or possible limited human transmission remains unknown. Therefore, further surveillance is needed for these canine influenza viruses and their reassortants in multiple mammalian hosts.


With the recent decline in avian flu outbreaks in China following their massive nationwide poultry vaccination campaign in 2017, many people may believe the pandemic threat has abated - at least temporarily.

But long time readers will recall that a little over three years ago, Chen Hualan - director of China's National Avian Influenza Reference Laboratory -  pegged the EA (Eurasian Avian-like) H1N1 swine virus (EAH1N1) as having perhaps the greatest pandemic potential of any of the novel viruses in circulation.

Her comments came after the publication of her paper (see PNAS: The Pandemic Potential Of Eurasian Avian-like H1N1 (EAH1N1) Swine Influenza) by Hualan et al. that described the Prevalence, genetics, and transmissibility in ferrets of Eurasian avian-like H1N1 swine influenza viruses.


While the exotic H5, H7, H10, and other avian flu strains are a legitimate pandemic concern, for as far back as modern science can take us (about 130 years), all human flu pandemics have come from H1, H2, or H3 viruses (see Are Influenza Pandemic Viruses Members Of An Exclusive Club?).

All of which makes the continued evolution - and host-expansion - of H1, H2, and H3 influenza subtypes of particular concern. And as this study points out:


. . . .  at this time there is no surveillance (serological or virological) for these viruses in humans in Southern China, and the frequency of human exposure or possible limited human transmission remains unknown.

Making `no news' something less than `good news', when it comes to novel flu activity in China.