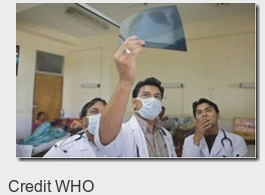 
The two main measures of the accuracy of a diagnostic test are sensitivity and specificity.
And while we usually think of diagnostic tests as a laboratory analysis of blood, sputum, urine, a biopsy, or CSF - or perhaps an imaging study (MRI, CAT scan, X-Ray) - sometimes they boil down to a physical exam.

Just over a year ago, in Evaluation of a Visual Triage for the Screening of MERS-CoV Patients, prolific MERS researcher and former KSA Deputy Minister of Health, Ziad Memish, MD et al looked at the Saudi scoring system - based on visible symptoms, and exposure history - to decide who to isolate and test as a potential MERS case.

Their conclusion was: it doesn't work very well.


This visual scoring system failed to identify more than 25% of MERS cases, and at the same time more than 80% of tagged' patients were negative for the virus.

The authors were particularly blunt in their assessment (bolding mine) of the current system.


The  current  study  conducted  on  a  large  number  of  patients  shows  that  clinical  scoring  is not predictive  of  MERS  infection.

Our  results  are  robust  and  confirm  that  MERS  cannot  be distinguished from other respiratory infections based on  risk factors and clinical features.  Thus all  patients with  non-specific  symptoms  in  a  MERS  endemic  area  will  have  to  be  isolated  until MERS can be ruled out by rapid PCR testing.

Between atypical MERS presentations, and mild or asymptomatic infections that don't meet the criteria for testing, it seems likely that some number of MERS cases go unrecognized and untested.


But even assuming they are selected for testing, accurate results are not guaranteed.

Last October, in AJIC: Intermittent Positive Testing For MERS-CoV,
we looked at a study, that found intermittent positive results for MERS-CoV on reverse-transcription polymerase chain reaction (RT-PCR) tests.  The authors (including Memish and Al-Tawfiq) wrote:

The most common (and least invasive) sampling method for respiratory infections  - and the only one cited in this abstract - is via Nasophyaryngeal (NP) swab. Mentioned in the conclusion, however,  is the need to evaluate the comparative effectiveness of sputum samples.


The CDC's interim recommendations for specimen collection for MERS are more rigorous, calling for `Collection of all three specimen types (not just one or two of the three), lower respiratory, upper respiratory and serum specimens for testing using the CDC MERS rRT-PCR assay is recommended.'

Between sub-optimal (NP)) sample collection, and an RT-PCR test that sometimes lacks enough sensitivity to detect the virus, even some of those selected for testing may slip through the cracks.

And then there's serological testing for past MERS infection, which has previously returned only low levels of exposure in the general population of Saudi Arabia, and somewhat elevated levels in camel workers (see mBio: High Prevalence of MERS-CoV Infection in Camel Workers in Saudi Arabia).

But previous studies have suggested that mild or asymptomatic cases tend to mount a weak, short term, immune response - and may therefore not test positive within a few months of their illness.
All of which brings us to a new study, published in the CDC's EID Journal, that looks at the sensitivity and specificity of current serological antibody testing for the MERS Virus - particularly among those with low antibody responses - and proposes options going forward.


While RT-PCR remains the standard for diagnosing active infections, accurate  serological assays are invaluable for population studies, and as a backstop to detect cases mised by RT-PCR testing.

This is a long, detailed, research paper and I've only included a few excerpts. Follow the link to read it in its entirety.  When you return I'll have a brief postscript.

Middle East respiratory syndrome coronavirus (MERS-CoV) infections in humans can cause asymptomatic to fatal lower respiratory lung disease. Despite posing a probable risk for virus transmission, asymptomatic to mild infections can go unnoticed; a lack of seroconversion among some PCR-confirmed cases has been reported.

We found that a MERS-CoV spike S1 protein–based ELISA, routinely used in surveillance studies, showed low sensitivity in detecting infections among PCR-confirmed patients with mild clinical symptoms and cross-reactivity of human coronavirus OC43–positive serum samples. Using in-house S1 ELISA and protein microarray, we demonstrate that most PCR-confirmed MERS-CoV case-patients with mild infections seroconverted; nonetheless, some of these samples did not have detectable levels of virus-neutralizing antibodies.

The use of a sensitive and specific serologic S1-based assay can be instrumental in the accurate estimation of MERS-CoV prevalence.


Diagnostic assays with validated high sensitivity and specificity are crucial to estimate the prevalence of MERS-CoV. Molecular-based assays have been developed that enable sensitive and specific diagnosis of MERS-CoV infections (18,19).

Although the molecular detection of viral nucleic acid by reverse transcription PCR (RT-PCR) is the standard for MERS-CoV diagnosis, serologic detection remains necessary. Viral nucleic acid is detectable within a limited timeframe after infection, and samples from the lower respiratory tract are required for reliable results.

Furthermore, whereas mutations in the viral regions where the PCR probes bind could lead to decreased sensitivity (20), genetically diverse MERS-CoV strains may retain antigenic similarity (21). Validated serologic assays are needed to ensure that the full spectrum of infections is identified; antibodies can be detected for longer periods after infection and even if viruses mutate.

Despite the number of serological assays developed, none is considered to be fully validated. There are 2 major challenges concerning specificity and sensitivity aspects of MERS-CoV serologic assays.

The first challenge is that 90% of the human population have antibodies against common-cold–causing human coronaviruses (HCoVs) that could cross-react, resulting in false positives in serologic assays, especially in persons infected with viruses belonging to the same genus of β-coronaviruses as human seasonal coronaviruses OC43 and HKU1 (26). The spike protein, specifically its N-terminal S1 domain, is highly immunogenic and divergent among HCoVs, so it is an ideal candidate for virus-specific serologic assays (27).

The second challenge is the low antibody responses among mildly infected and asymptomatic cases. Severe MERS-CoV infections result in a robust immune response allowing serologic detection in patients with positive or negative PCR outcomes (28), but PCR-diagnosed mild or asymptomatic infections may cause variable immune responses that can be undetectable by serologic assays (5,15,17).

Therefore, a sensitive assay is necessary to avoid false-negative results that can cause failure in detection of subclinical infections and underestimation of prevalence in serosurveillance studies. We evaluated the antibody responses following severe and mild laboratory-confirmed MERS-CoV infections, validating and comparing different assay platforms for the specific and sensitive detection of MERS-CoV infections.


Because patients with mild or asymptomatic infections do not develop severe illness and thus go unrecognized, they might play a role in spreading the virus into the community, initiating outbreaks in which index case-patients report no history of camel or patient exposure.

Therefore, defining the subclinical burden of infection will enable better understanding of the extent, severity, and public health threat posed by MERS-CoV, which, in turn, will guide the development and implementation of proper strategies to contain and prevent ongoing outbreaks of infection with this virus.


Ms. Okba is a PhD candidate in the viroscience department of Erasmus Medical Center, Rotterdam, the Netherlands. Her research interests include the development of diagnostic and intervention strategies for emerging viruses.

Asymptomatic infections - once believed to be the exception - now appear to be fairly common.  What isn't known, however, is how well asymptomatic cases can transmit the MERS virus to others. While this review is unable to directly answer that question, the authors do write:

While MERS continues to simmer in the Middle East - and hasn't shown signs of taking off like SARS did 16 years ago - better, and more thorough testing could tell us great deal about true extent of MERS in the population, its evolutionary path, and its future pandemic potential.

Posted by Michael Coston at 7:51 AM